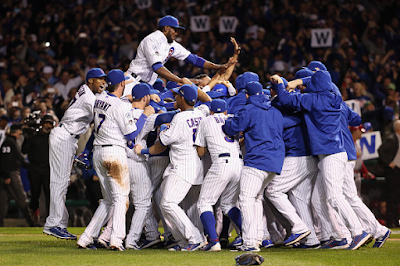 NOTE:  I posted this much later than expected so both the ALCS and NLCS have started.  This was written prior to the start of those series though.

Great games and series in the Wild Card and Division Series playoff rounds.  All you want are good games and great moments and we got both.  The Pittsburgh Pirates didn't beat Chicago but the Cubs did beat the Cardinals which I thought would would happen. It is great to see Chicago get to the National League Championship Series but it was just as fun watching them beat the Cards who are their big rival.  This Cubs team is young and easy to like. These guys aren't a fluke and it isn't hard to think they could go all the way...which is exactly what I think they'll do.  I expect to see the Cubs in the World Series.

The Mets are a good blend of offense and pitching but I didn't think they'd be able to defeat the Dodgers as they did.  They are a tough matchup for the Cubs and should provide for an excellent series.  You have to like any team who can beat a team that throws Kershaw and Greinke at you in a five game series.  The moves New York made at the trade deadline were great and they have backed those moves up with a nice post season to this point.

Kansas City beat a Houston Astros team which surprised me by beating the New York Yankees in the wild card game.  I loved this matchup and wasn't surprised it went five games.  Kansas City is still that team that just makes it happen.  Hits can come from anywhere and if their pitching can get to the seventh inning with a lead, the win is almost guaranteed.  K.C. also had to be excited to see the outstanding effort by Johnny Cueto in the clinching game five.  The Royals can't be counted out in any series.

Toronto stormed back after losing their first two games to Texas to stamp their appearance in the ALCS.  I love this team and that power.  With all the great pitching we now see in the big leagues it is fun to see a team who can seemingly hit one out during any at bat.  And what did I think of the Jose Bautista bat flip?  Loved it.  While I enjoy the prim and proper respect that baseball cherishes I also think that moments like that, great moments, should be full of emotion.  Bautista didn't direct his actions at any particular player.  It was just emotions flowing.  I stand by my original thoughts and think Toronto will make it past Kansas City to reach the World Series. 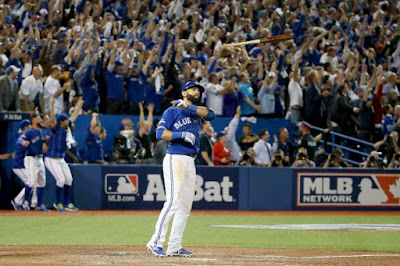