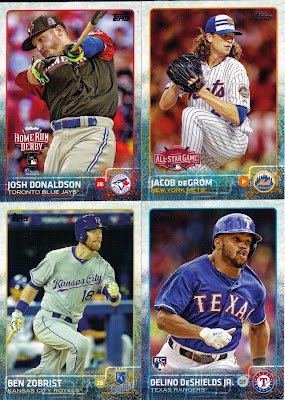 Grabbed a retail box of the 2015 Topps Baseball Update Series from the local Wally World.  For just under $10 you get 72 cars which I broke out below.  Standard update stuff with lots of young players and those who have changed teams.  Always nice to see players in their new unis.  They also throw in some inserts from the original series as well as some new ones.  I really like the All-Star Game and Homerun Derby cards.  Those are always a favorite of mine though I really, really dislike the hats the players wore for the game.  The team cards were also nice.  Nothing special but a nice pic with a little write-up on the back.  I've always liked this set and I didn't find any reasons not to like the update cards...though pulling a relic would have been nice.