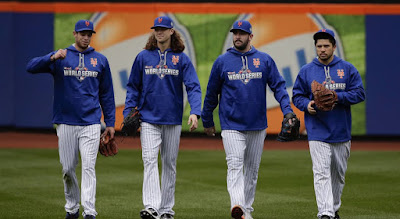 While I could have seen the Kansas City Royals here at the beginning of the season I really didn't see the New York Mets in the World Series.  While I have no love for the Mets this is a great matchup.  The Royals are a great contact hitting team while the Mets starting staff loves to strike out opposing batters.  So where do you go with choosing a winner?  I'll go with New York.  When in doubt go with pitching.  While the bullpens favor the Royals the Mets definitely have an edge with their starting rotation.  They also have enough offense to back it up.  With a few good starts by their pitching this could go Kansas City's way.  Still I'll say the Mets win this one in seven games.  That said, I'm rooting for the Royals.  I love this team and really want to see a World Series banner raised at Kaufman Stadium.  Should be a great series no matter who the eventual winner is. 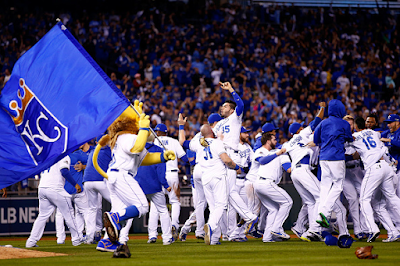