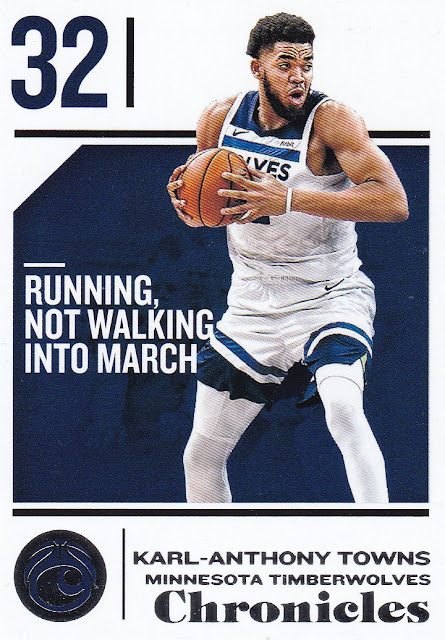 Chronicles gives you a look at cards across the Panini spectrum some of which never made it to the market.  I've never seen these packs before so I was excited to pick up this pack of 2018-2019 Chronicles Basketball.  This Karl-Anthony Towns card is one of three actual Chronicles cards you receive.  It's a clean design which is growing on me.  Autographs (including past greats) and relics are a possibility with Chronicles but I wasn't that lucky.

Again you'll get cards from across the Panini spectrum of basketball.  These here include Essentials, Luminance and Elite.  The non-Chronicles cards were all rookie cards.  While not a bad thing it limits who you'll get in your pull.  I didn't hit any big names but did pull some good names.  I like the Luminance design.  The other two are OK but don't excite me.

The Score and Playoff cards are some I've never seen and I don't think hit the market.  The Playoff design is OK but that jersey Collin Sexton is wearing has to go.  Maybe it was a summer league thing.

The Panini design is pretty boring but they do give you plenty of room for the photos and I like both of these.  Needs a team logo as well.  This was a fun pack due to the great variety and having no idea what I'd find.  I would have liked seeing more veterans but that isn't the focus here.  So if you like basketball cards I think these are worth taking a look at. 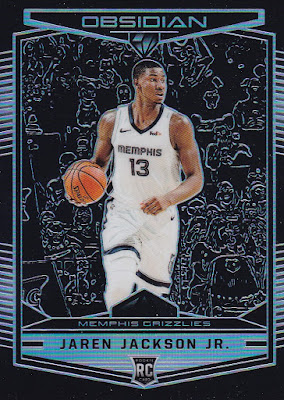 This Obsidian card is kind of cool.  It's thicker than the average card and shiny which I know appeals to a lot of collectors.