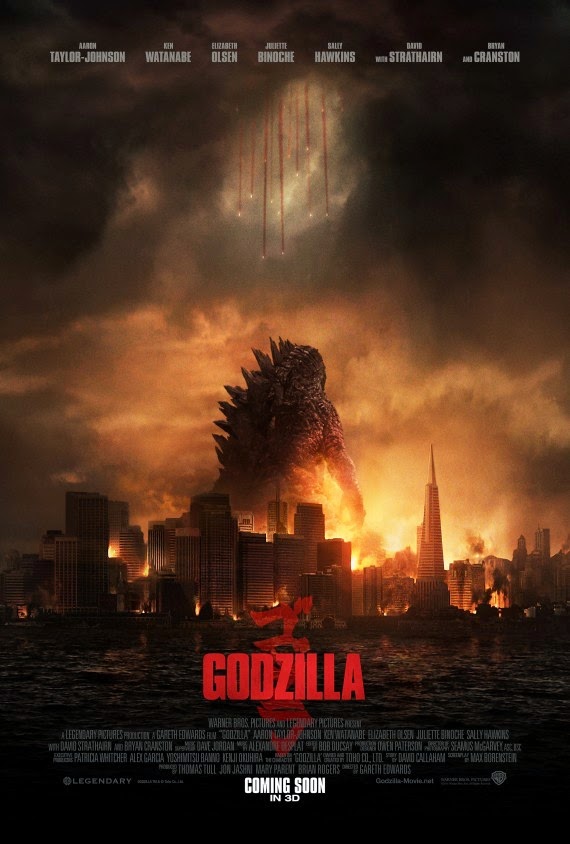 I've been looking forward to the new Godzilla movie for some time.  I grew up watching the Godzilla and King Kong movies in the 70's and have been a huge fan ever since.  As they did with the 1998 Godzilla movie they went a different direction.  I really like the '98 version  (I think I'm in the minority there) and I'd put this on par with that one.

The reboot of the origin is fine but I just want to see Godzilla fight and destroy stuff.  How he got to be isn't the most important thing in the world and I'm not looking for a lot of explanation.  As with many movies I got restless at the beginning waiting for the fun to begin.  But I know it is important to give us the back story so things make sense.  The fighty fighty was good and I thought they dealt with the "what, our military couldn't blast this thing to oblivion" pretty well though that is always a tricky part of these movies.  The "bad" monsters were fine as well.  Not sure they've actually named them as of yet.  While I enjoyed the movie very much I'm probably not going to sound overly excited.  It wasn't blown away but don't take that as a negative.  I think this movie is good and recommend it to everyone interested.  I could nit pick but it definitely isn't worth it.

I'm going to start something new with giving things I review a rating.  I feel like I say the same things over and over when talking about whatever I may be reviewing and wonder if I'm really getting my point across.  I'll make it an easy 10 point scale.  I'll place my rating at the bottom of each review to make it easy.  I may even go back and add it to older posts.  With that I'll give this movie 7 out of 10 stars.  Go watch it and be open to the new way they take Godzilla.