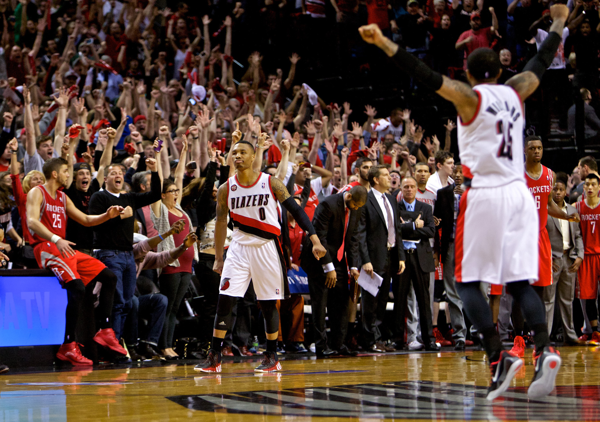 Portland edged out Houston thanks to a spectacular last second shot to win their first round matchup with the Rockets.  I thought this would be a close series and it didn't disappoint.  Damian Lillard's three as time expired in game six closed out a series that was hard foughtand any Portland fan, to include myself, has to be happy about.  You wanted Portland to close this out at home in game six and watched teams like Atlanta, Memphis and Toronto fail to do so only to lose in seven.  This was huge.  The starting five of the Trail Blazers played well with Lopez the only starter not to average 15 points or more per game.  And he still had a good series averaging 9 points, 8 boards and almost 3 blocks per game.  Of course the stars are Aldridge (29/11/2.7 blks) and Lillard (25/6/6.7 asts).  This is what you want to see.  Those guys stepping up and taking it to the opponent come playoff time especially when you have a bench that won't give you a ton of quality minutes (only Mo Williams had more that 13 minutes a game off the bench with 25 per).  While I didn't get to see every minute of every game I did get to see quite a bit and it was great.  I really thought they played as a team.  Didn't mean they were always in sync but I believe the starting five can hang with just about anyone out there. 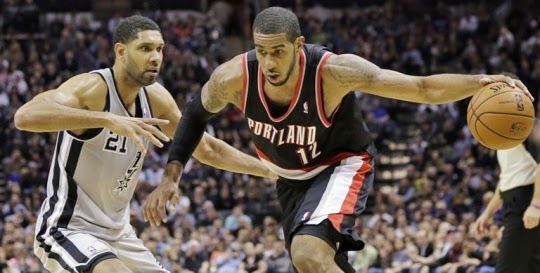 Now they move on to play the Spurs.  I figured Dallas would only get one victory at best but the Mavericks took it to San Antonio who had to win the series in seven games.  Not sure exactly what to take out of that.  It could really irritate them, hopefully have worn them out or not affect them at all.  It seems like a crap shoot when determining what a series like that will do to a team.  Considering the veterans and coach I'd say it could be the former.  No matter I think this will be another good series.  I'd love to say Portland wins but the Portland stars are matched up with guys of equal talent and savvy.  While Tim Duncan may not be better than LaMarcus Aldridge at this point in his career I am a big believer in Tim and think it will be a completely different series for Aldridge than what we saw in round one.  Houston didn't have a great matchup and Aldridge took advantage.  Duncan is that guy that has been around forever and can make the best of power forwards look bad.  Lillard will be matched up against Tony Parker who can match his intensity and can play defense.  Lillard can run him around the floor and will get his assists but he isn't the best defensive point guard around so this could be tough.  I think it is a push at the other positions.  That said the edge goes to San Antonio who also has a deeper bench (they had eight players average 16 minutes in round 1).  Hopefully I'm jinxing Yaz and the Spurs.  Nothing personal my friend.  I expect some close games but again the veteran presence and coaching of the Spurs should make this a six game series with the Spurs advancing.  Hopefully Portland can rise to the challenge building off what they did last series and maybe pull out the upset.  That is the fun part.  We won't know until the games are played...
Posted by Bulldog at 12:31 PM