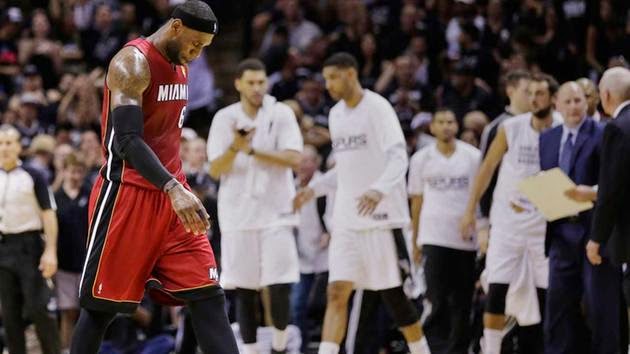 Now that the NBA Finals are over LeBron James has a huge decision to make.  Does he stay with the Heat and hope they can add the needed players around him or does he bolt for another team in the hope than he can add more championship rings elsewhere?   This will be tough decision as many different things play into this.  While I'm sure he new this when he joined the Heat it won't make this any easier.

First I don't think you could ask much more of LeBron in his current run with Miami.  James has been nothing short of a beast as he led the Heat to two championships and four straight Finals appearances.  Only the loss to Dallas in 2011 was an upset.  I still can't figure that one.  Doesn't matter as LeBron is the reason Miami made it to four straight Finals and it was in no way his fault they lost this year to the San Antonio Spurs.  Miami just ran into the best team in the league and it showed.  I think LeBron is probably the second best player all-time and there are good arguments about him being number one.

Should LeBron return to Miami?  He doesn't owe the team anything.  He has held up his end of the bargain.  Some may think he should stay because Miami held up their end but the NBA is a business and there is no shame in James taking his talent elsewhere.  What can Miami do to better itself?  First, Lebron, Dwyane Wade, and Chris Bosh will have to make a decision together to opt out of their player options and get new contracts that allows the team to better itself.  While that is what Miami needs it seems to put the Heat in a tough position.  Wade will be 33 in January and is showing his age.  Whether it be the time off he requires, the declining defense or lack of offensive explosiveness he just isn't the same guy he once was.  Is a player worth big money?  He has helped Miami win three championships and deservers some respect but that should only go so far.  Can Miami afford to pay him a big dollars?  And how many years should they give him?  Tough questions.  Bosh, while still good and younger, isn't a player I'd give max money too either.   He doesn't play big, in size or in the terms of stats, anymore.  I think he'd get his points with a team who isn't as good but I wouldn't trust him to carry a team.  So how does it play out? 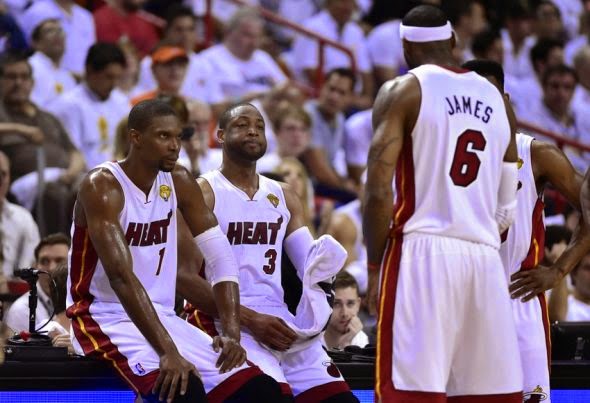 It all starts with the big three.  They must opt out.  They opt in on their contracts and Miami won't have enough money to go get a new ball boy.  Opt out and the ball is in Miami's court.  Doesn't mean it will be easy.  This team needs plenty.  Will Ray Allen return?  Is Mario Chalmers a good enough point guard?  Power forward is a need and they need depth at every position.  And there are no easy answers.  Miami will once again hope aging quality veterans and roll players will take a pay cut to play with the big three.  It has worked in the past but will players think this incarnation of the big three is good enough to carry a team to a championship?  While there seems to be only one strong contender in the Eastern Conference it won't always be that way.  Miami has to get better to ensure more trips to The Finals.

Would LeBron go somewhere else?  Teams like Chicago, the Lakers, Houston, Cleveland, New York and anyone with a dream will make a push to get the best free agent ever.  Some are in a better position than others.  I personally think Houston would be the best destination followed by Chicago.  Houston gives him a true big man and an excellent scorer.  Chicago has the great shooting guard and a good big man as well as shooters around them.  Would any of them be instant contenders with James?  Hard to tell but James carried the Cavaliers to a Finals appearance with a lineup that wouldn't scare anyone.  So putting him on a team with real stars and talent has to make you think they could do it.  Houston of course would have to fight through a stacked Western Conference so Chicago seems like a better fit assuming you believe Derrick Rose can stay healthy.  If I had my druthers I would like to see him go to San Antonio.  I know it would never happen but you have to love the thought.  He is perfect for their style of game.  Fast breaking style, team offense, and he can play defense.  Would be a great bridge to the post-Duncan era.  I can dream.  Well a real dream would be him landing with Atlanta or Portland but I haven't been drinking that much tonight. 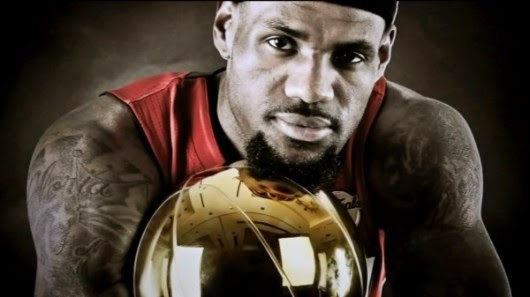 No matter what LeBron decides to do it will be the biggest story of the off season and will determine a lot as to how the next season will play out.  If I had to put money on it, LeBron stays in Miami and why not.  They have as good a chance as anyone in the Eastern conference to make it to The Finals.  Miami of course will have to do some tweaking but if I'm the Heat I'd do whatever it takes.  I can't wait to see how it all plays out.  It isn't often the greatest player on the planet has the chance to change teams and change destinies.
Posted by Bulldog at 10:27 PM