Uniforms: Atlanta Falcons Through the Years

I've always been a sports fan who loved uniforms.  When I was young I would even gravitate towards certain teams just because of the uniforms they wore.  The Michigan Wolverines are probably the biggest example of that for me.  I want to take a quick look at the Atlanta Falcons uniforms throughout the years.  While it wasn't the reason I became a fan of the team, that red uniform of the 70's is still my favorite of all-time among any sport. 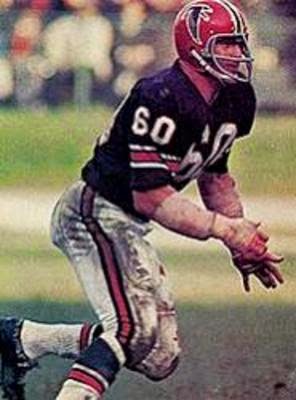 From the inception of the Falcons until 1970 Atlanta wore a black uniform with white numbers and letters.  Above is all-time Falcons great linebacker Tommy Nobis.  I was too young to remember this uniform but it was a good start for Atlanta.  They were the only team to wear black other than Oakland at the time.  Their helmet was a primary red with the Falcon logo black with a white outline.  A black and white stipe ran from the back to front down the center of the helmet.  Again a good first offering but I wouldn't consider it one of my favorites.  The Falcons currently wear this as a throwback uniform. 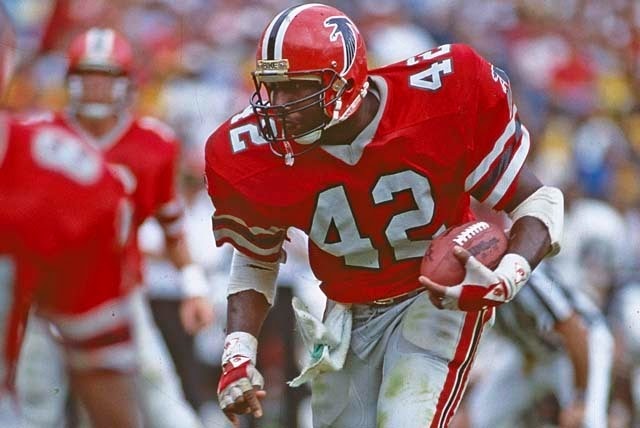 Gerald Riggs, above, is wearing the uniform the team wore from 1971 through 1989.  While hard to see here his uniform has the silver numbers and pants as opposed to the white numbers and pants used through the 1977 season.  There were other minor changes but I believe those were the biggest.  This uniform is my all-time favorite of the Falcons.  Of course the 70's were my formative years as a young lad when it came to watching sports so this is how I remember Atlanta in my early years.  I own the Mitchell and Ness Steve Bartkowski  version of this jersey.  I really like the red in the uniform paired with the black and the silver.  Again this will always be the benchmark for me when it comes to uniforms.  I really wish Atlanta would wear these as a throwback from time to time which they last did in 1994. 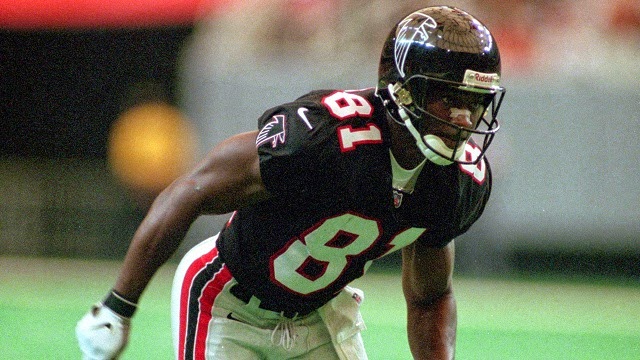 Next was the Falcons' back in black look as I refer to it.  The bold change was good a look and led to other teams moving to black uniforms.  This is Terrance Mathis showing off the look that Atlanta took their only Super Bowl appearance as they wore this particular uniform from 1990 through 2002.  The black version had white numbers with a red outline with the helmet featuring the original helmet logo outlined in white.  The white uniform had black numbers until 1997 when they changed to red.  Considering how much I loved the red unis Atlanta won me over fairly quickly with this version.  Again a sharp uniform that harkens back to the team's original uniform while also starting a trend that spread to other sports as well.  I have the Deion Sanders version of this jersey that I purchased back in the mid 90's.  Even if Deion left for greener pastures he is still a beloved figure in Atlanta. 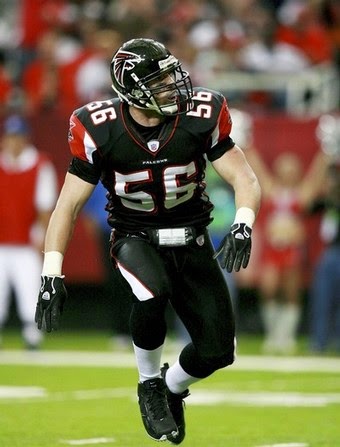 The current Falcons uniform was introduced in 2003 and the black version is shown at the left as modeled by Keith Brooking.  Warren Dunn shows off the red version below.  There have been different combinations of pant colors used over the years with the team settling on only white pants starting in 2009.  Again Atlanta did well.  It is hard to come up with different uniforms over and over and still come up with something that looks good.  I like the black with more red and white added in stripes and shoulder colors.  At first I was leery but it looks good.  The uniform numbers on the black version are white outlined in red.  The helmet logo was redone with red added and outlined in white.  The redesign definitely updates the logo in a sharp way.  The red version has white numbers outlined in black.  Both look great.  I own the Warrick Dunn black version.  Wouldn't mind a red version but as I already have three Falcons jerseys and I'm not sure I really need to add another.

So as you can tell I'm pretty happy with the history of the Atlanta Falcons uniforms.  None were too plain nor went off the deep end with some crazy design.  A good page for seeing the evolution of the Falcons jersey, among all the other teams, can be found here at Gridiron Uniforms.  Check it out.  I doubt this will be my last post on uniforms.  It is definitely something I enjoy so I'll see what else I can come up with. 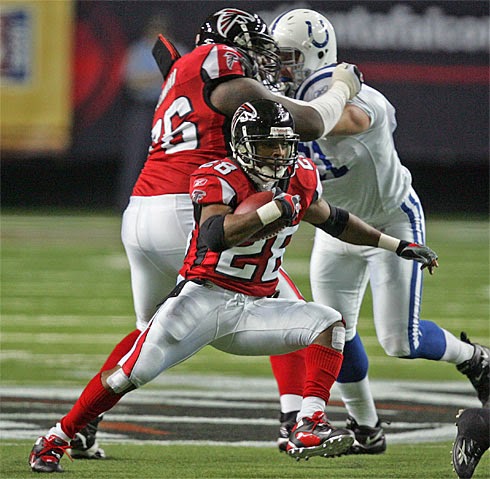