Panini has what I would call a base set from their brand which has no branding like the Prestige or Hoops offerings from Panini.  I picked up a rack pack containing 40 cards.  Not a bad looking set but I wouldn't call it spectacular.  The front is dominated by the photo which is good.  I pulled four rookie cards, one red knight parallel card, two preparation cards and two knight school cards.  The base cards are dominated on the front by the player's photo which is just how I like it.  The photos are good.  They are all on court action shots with a few of the above the rim variety.  I like the photos with the one of Jordan Hill being my favorite (his hair in the photo is great). The bottom of the card has a blue background area that contains the numbers 13 and 14 on either side and the player's name, Panini, and the team name all in silver embossing.  Not a big fan of this look.  I can't put my finger on it but I just don't care for it.  I would have preferred to see a smaller Panini imprint somewhere, the team logo instead of team name and player position.  Seems like a lot but we've seen it on other cards and it worked.  They just need to get a little more creative.
The backs contain a smaller copy of the front photo on the top portion of the card with the card number and NBA logo in the upper left and right respectively.  I know this is random but I like the NBA logo placement for some reason.  Under the photo you see the player's name then his height, weight, and birthdate.  Below that are some pretty decent short takes on the player.  The team logo is to the left with the Panini logo under that.  College and draft position are next.  Stats include the last season and career totals - g, FG%, FT%, 3PM, RPG, APT, STL, BLK, PTS, PPG.  All good but with the points per game listed is total points really required?  Could use that space to add 3P% and/or change the blocks and steals to per game averages instead of totals.  While I prefer more stats the backs actually look pretty good.  The write-ups add value and it is just a nice looking, colorful back. 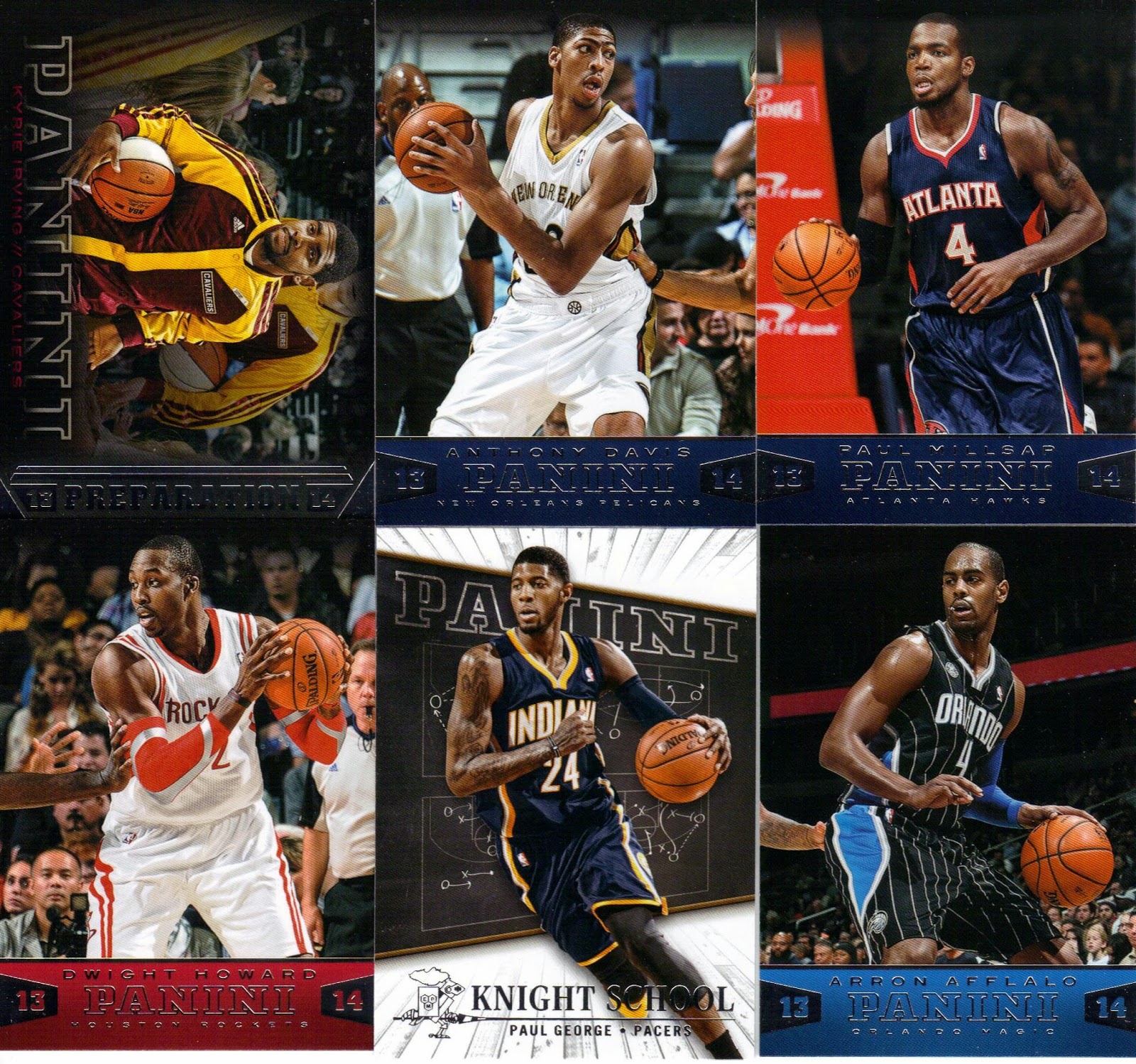 For the price ($4.98) you can't go wrong.  Seemed a little light on stars but I can't complain too much.  I do like the knight school card inserts but the preparation cards didn't do anything for me.  The only rookie I knew was Anthony Bennett and, well he is Anthony Bennett...  The Jordan Hill Red Knight parallel is ok and I also received his base card.  There are plenty of other inserts with this set.  Look here to see some of the other inserts you can pull.  Always seems you like have to purchase boxes to really get good inserts.  I get it but it would be nice to grab some of these sometimes in retail packs.  Maybe I'm just not lucky?   For the value this is worthy picking up just for the fun of it.  If I was to choose one set from this year this wouldn't be it but I won't doubt I'll pick more of these up at some point.