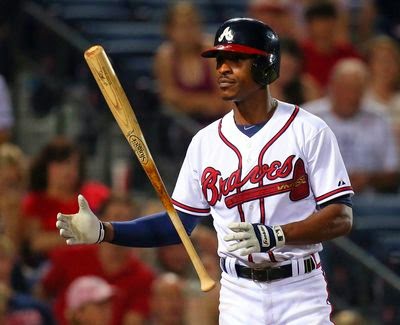 Some things just never seem to change.  Again I have to talk about the offensive woes?  The Atlanta Braves are having a good year at 54 and 45 but they are 1 game out of first behind Washington and have plenty of company vying for the wild card.  One thing that still gets me is that the Braves signed B.J. Upton two years ago when they could have resigned Michael Bourn for virtually the same price (Bourn is actually cheaper).  Yes they did it to help entice Justin Upton but the Braves have paid for that move.  All he seems good for is 150 strikeouts a year and the .197 average, .271 on base, and .311 slugging in 219 games.  And it isn't like he was all that great when played for Tampa Bay.  Enough whining about that.

Atlanta does have some players who are having very good years to include Justin Upton, Freddie Freeman, Evan Gattis and new second baseman Tommy LaStella.  Center field would be my priority to upgade the offense if they can make a move before the trading deadline.  I'd love to see a speedy guy who you can put at the top of the order that gets on base all the time.  Not a lot of those guys out there and as good as he's been in the leadoff spot I'd like to see Jason Heyward farther down in the order.  A third baseman with some power would also be a plus but other than Adrian Beltre I don't know if anyone fits that requirement.  I was glad to see Atlanta finally drop Dan Uggla.  Great guy who gave us one very good year but it was time for him to go.  I have to hope the offense can come around the second part of the season.  Maybe LaStella and the return of Gattis from injury can spark this offense.  It is just frustrating when you have such good hitters and some having very good years and the offense still doesn't produce.  Here are some of Braves' major league rankings so far this year:
Runs - 27th
Homeruns - 17th
Average - 24th
OPS - 25th

Braves' pitching is sixth in the majors in ERA and is doing well.  Considering the injuries the pitching staff has endured and mist be considered a huge win for Atlanta.  I wouldn't complain if the Braves grabbed one more arm for the bullpen but that just seems like I'm being greedy.

Atlanta can still win their division and/or compete for a wild card.  I truly believe this offense is better than what we've seen.  Hopefully something will get it going.  If it does there is no ceiling for this team in the National League.  I don't think a World Series birth is out of reach.  First they must reach the playoffs and find that inner consistent offense.