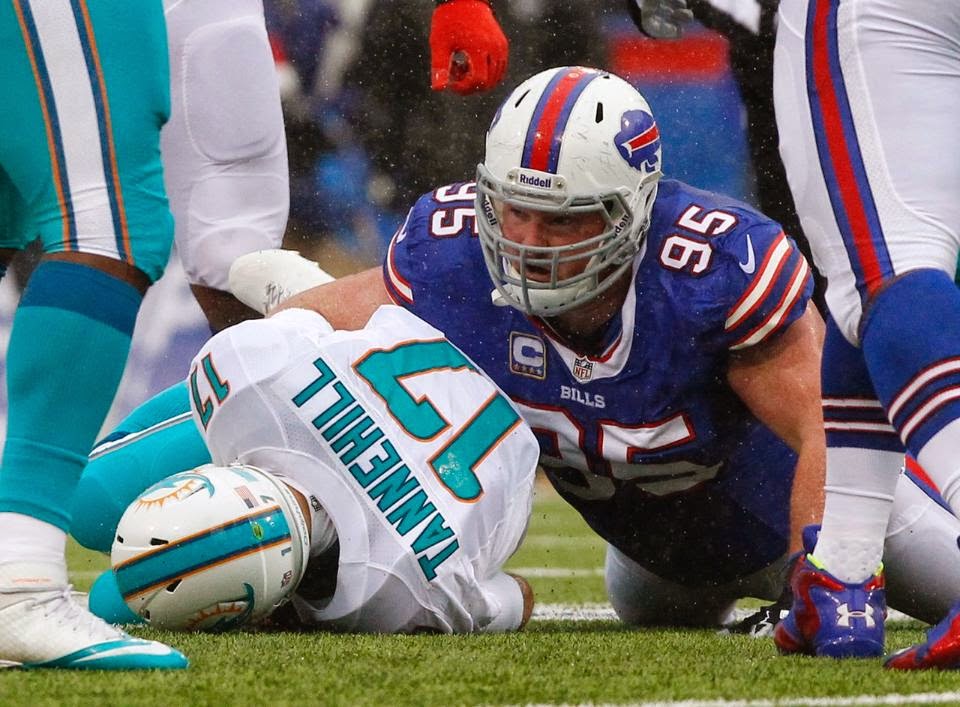 Powered by special teams, Buffalo pitched a shutout in the first half and didn't let up in a 29-10 victory over Miami.  Kicker Dan Carpenter hit on five field goals while C.J. Spiller ran back a kickoff 102 yards for a touchdown.  Sammy Watkins added the other scoring on a touchdown pass from EJ Manuel for the first of his career.  Spiller added 69 yards rushing averaging 5.8 yards per carry while Watkins totaled 117 yards receiving.  The defense had four sacks and an interception while only allowing Miami to convert 5 of 16 third downs.  EJ Manuel played well and didn't throw an interception again helping his team win by minimizing mistakes.  Great win that puts Buffalo in sole possession of first place after two weeks.  Yes it is only two weeks but when was the last time we could say that?  If feels good.

Atlanta was not as lucky.  Cincinnati's defense held the Falcons to 309 total yards while allowing them to convert only 3 of 12 first downs and forced three turnovers.  Matt Ryan was the sole culprit as he threw three interceptions.  Bad day for him and so went the Falcons.  Atlanta averaged 5+ yards per carry but without watching the game it is hard to say in what context or is it easy to figure out why they didn't run more.  I would like to see how Cincy took Atlanta out of their game.  Ryan was only sacked two times and no quarterback hits.  Hopefully they haven't figured something out the rest of the league can mirror.  Atlanta has Tampa Bay in week three.  Hopefully they can bounce back but with the Bucs looking for their first win they are sure to be tough.

What a week for finishes.  Kansas City doesn't convert a fourth and goal with just 15 seconds left as they tried to tie the game...  Cleveland wins on a short field goal after starting a drive from their four yard line and the New Orleans' defense blows the coverage to set up the game winning kick...  Tampa Bay isn't able to attempt a game winning field goal with eight seconds left when their receiver is injured and can't get up.  Tampa had no timeouts and the automatic 10 second run off meant the game was over...  The Jets find a way to lose when they nullify a game tying touchdown on 4th down when their sideline called a timeout.  No it wasn't coach Rex Ryan, the only person allowed to call the timeout, but a defensive end who saw the offensive coordinator signaling for a timeout.  And yes they did not convert the subsequent replaying of said 4th down...  Chicago pulled off a great comeback against San Francisco who once again did nothing in the second half.  And the Bears did this behind Jay Cutler who threw for 176 yards, four touchdowns, and no interceptions.  Wow.  Not a line you see from Cutler very often...  Did San Diego take it to Seattle or what?  I'll be curious what San Diego does with this win.  Can they keep the momentum at Buffalo in week three?  I say no.  Sorry Yaj...  What the heck happened to the Lions?  To fall that flat against Carolina is a huge letdown after their great performance in week one...
Posted by Bulldog at 8:27 PM