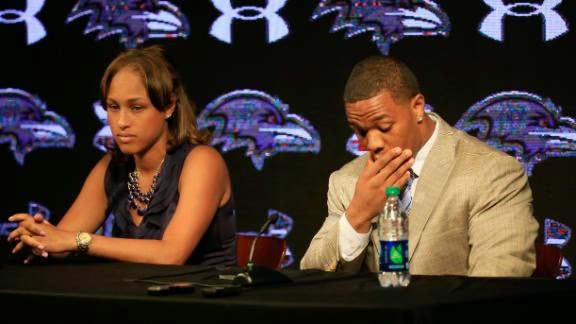 I won't dwell on this too long.  The Ray Rice video in which he knocks out his then fiancé came out yesterday.  The outrage came from every direction aimed at anyone and everyone involved.  I think Keith Olberman just called for the resignation of the janitor at the hotel where the incident occurred.

To some point I get it.  Now we see what happened.  Now we know that no matter what his fiancé said after the fact, Ray Rice was to blame.  "Self defense" is not appropriate here.  I think everyone knows that now.  I also agree with what Chris Carter said on Mike and Mike.  This was no surprise.  When we saw the first video months ago of Ray Rice dragging his unconscious fiancé from the elevator we knew he had knocked her out.  Whether or not you thought he was acting in self defense we knew he had taken the extreme measure of knocking her out which is a violent act no matter how you think it through.  Also his actions or lack of actions and concern for her after dragging her out of the elevator said much to his state of mind and to me what he thought of what he did.  That told me he didn't care.  I didn't need to see a video of what happened inside the elevator.  That told me all I needed to know.

Yesterday the Baltimore Ravens terminated Rice's contract and the NFL suspended him for the season.  Both have taken a ton of heat for not doing more sooner.  They both said they didn't have access to the video.  The majority of people don't seem to believe that.  While the NFL has resources just short of the FBI I would probably fault them for not trying hard enough to get the video.  But even that may be too much criticism.  The NFL has been consistent with letting the legal part of these issues play out.  Once it did Ray Rice had been entered into a diversion program, which upon completion could lead to the charges being expunged.  So to some extent nothing had been done via the legal system.  If I'm commissioner Roger Goodell I'd be saying "Hmmm, they didn't do anything to Ray Rice and they have all the evidence - it couldn't have been that bad, right?".   I'm  not saying that was the right thing to do but if the authorities weren't gong to do anything why would I think the NFL needed to make and example of this guy?  Heck the fiancé was even charged at one point.  Without seeing what happened who knew.  Only now do we know.  I'll eat all my words if the smoking gun is found and the NFL had actually seen the video before yesterday.  It just doesn't make sense that a commissioner whose been harsh in the punishment department since taking office would decide to be lax now of all times unless he didn't believe he had enough to press with a harsher penalty.  It doesn't seem as though many share my thoughts.

Bottom line is I'm glad the truth is out and the NFL and Baltimore acted swiftly and more appropriately.  I'm still perplexed by the reaction of people yesterday or of the delay in their reaction.  Maybe I get it but something still strikes as me as not right.  Now we must deal with the reaction to the reaction as someone said on the radio.  It will die down soon as we get back to football.  As the local radio guys said today, somewhere Danny Ferry is so happy this story broke yesterday.
Posted by Bulldog at 9:22 PM