Grabbed two packs of the 2016 Score Football trading cards.   Somehow I ended up with 28 cards from the two packs though each pack was supposed to only contain 12 cards each.  Haven't found a reason that explains the discrepancy but I'm not putting too much effort into it.  There are also 40 card packs at retail outlets.

The base cards are nice if not spectacular.  The fronts have the requisite name, position, team name, team logo, and the Score logo.  Photos are pretty good.  Rookie cards have an RC in place of the team logo as the players hadn't been drafted yet.  Score has the license to use the college teams logos on the helmets which is always nice.  I do like the backs.  The photo on the front is again on the back with about 1/3 actually being shown. Standard write-up information, last years and career total stats, player info and team logo also adorn the back.  I like it.  It isn't groundbreaking but a nice setup and plenty of color. 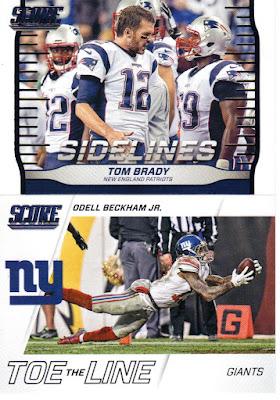 I pulled five different insert types totaling 8 of the 28 cards.  Only the Randall Cobb Chain Reaction card really stood out but they are all decent cards. For the pull itself it was ok at best.  No big stars among the base cards but I did pick up a Tom Brady on the Sidelines card.  I'm a Brady guy so I'll take it but would have liked to see a little more star power in the base set.  Overall a nice set and at the price point (which I can't remember) I'm sure I'll grab more throughout the year.  There also seem to be quite a few higher end inserts but I didn't get any of course.  If you like football cards these are definitely worth picking up at least one pack.