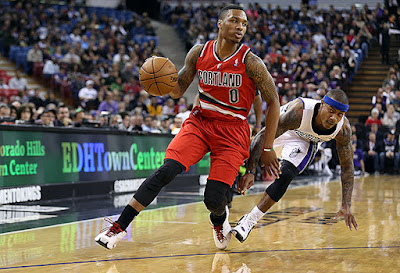 The Portland Trail Blazers' season ended at the hands of the Golden State Warriors last night.  Getting to the second round was huge in and of its own but Portland was greatly aided by season ending injuries by the Clippers' Chris Paul and Blake Griffin.  It was a surprisingly good season for Portland who was expected to struggle after losing four of their five starters in the offseason.  Enter C.J. McCollum, the NBA's Most Improved Player this season, who gave Portland 20 points a night at the shooting guard.  Without him it is doubtful the Trail Blazers win 48 games and get the number five seed in the Western Conference.  Damian Lillard for his part was nothing short of a stud.  Yes, McCollum was the only other firepower on this team but Lillard had a great season putting up 25 PPG, 6.8 APG and 4 RPG.  He shot two's at a 45% clip while hitting 37% of his threes (eight attempts per game).  He was also able to get to the free throw line six times a game in 35+ minutes per contest.   The rest of the team are nice/good role players but I doubt anyone is looking at Portland as a Western Conference contender as currently constructed.

This offseason the biggest free agent is coach Terry Stotts.  The team has a team option for next season.  That is a no brainer and rumor has it the team is looking to extend him long term.  Top player free agents are SG Allen Crabbe, SF Maurice Harkless, SG Gerald Hendeson, and C Meyers Leonard.  All good role players but not essential to future Portland success.  I like Crabbe and think he would be good for the bench moving forward as would Leonard.  I would like to see Portland go after some talent in free agency that could upgrade the front court.  All three positions can use attention.  A big who can rebound and give Portland some points in the paint.  A nice defender as well in the middle and a three who can spread the court and take some of the scoring load off the guards.  Role players are nice but staying pat won’t get the team any better.

There should be money to spend but every team will have money making it tough for teams to figure out free agency this year.  I think Stotts is a good coach.  If the front court can be upgraded I believe Portland could definitely be a team who can take it to the next level.  Lillard is for real and hopefully McCollum only continues to improve.  They just need some help and they could position themselves in the top four of the conference if they do so.  Hopefully Portland can build on this season and I look forward to seeing what they do this offseason. 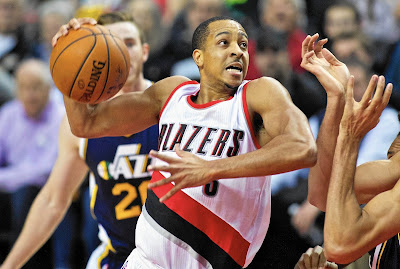