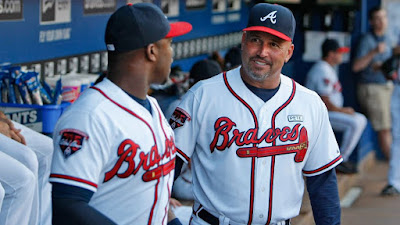 The Atlanta Braves fired Fredi Gonzalez Tuesday after the Braves started the season 9-28 already 13.5 games out of first place.  It was no secret this team would not be that good but this is not even close to what Atlanta had in mind.  It isn't Gonzalez's fault but I get why the team wanted to do something instead of just standing pat.  The timing of the firing is bad as they were in the middle of a road trip.  I'm thinking they may have been able to wait six more games and fire him after the team returned to Atlanta.  But the leadership thought it was time so they did what they had to.  To add injury to insult Gonzalez received an e-mail Monday night confirming his Tuesday flight back to Atlanta.  This was BEFORE he was notified he was fired.  That is a fail by Atlanta management.  Still the only surprise here was the timing. Gonzalez was 434-413 as the Braves' manager and I think he did a good job overall getting the Braves to the playoffs two times.  I've heard nothing but things about Fredi during his tenure with Atlanta.  Hopefully he'll find a good landing spot.  I think he deserves it.  Hopefully Atlanta doesn't go cheap and can bring in somebody of quality to turn things around.  I'd hate to see them go cheap now and waste an opportunity as they move into a new stadium next year.  As a fan I have hope.  There is always hope.
Posted by Bulldog at 7:56 PM