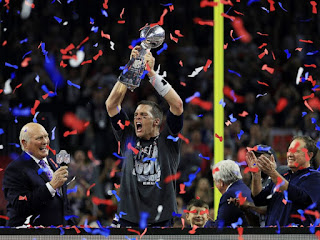 am not at a loss for words but I am beyond shocked at how the Atlanta Falcons lost to the New England Patriotsin Super Bowl LI.  I am a Falcons fan but I’m very much grounded and at no time was I comfortable with the score even with a 28-3 lead or even with the score 28-9 early in the fourth quarter.  Did some happy thoughts go through my head?  Oh yes but I know how great Tom Brady can be.  Still Atlanta lost this game in what will go down as an epic collapse by a team who all but had the Super Bowl won when they went up 28-3.


You have to question, and the Falcons and Atlanta fans will forever question, the play calling and play in general in the second half of the game.  With 2:06 left in the third the Patriots scored to make it a 28-9 game and tried a failed onside kick.  The Falcons had the ball at the New England 41 and promptly got it to the 32 yard line.  A holding penalty and sack later they were back to the Atlanta 49 and out of field goal position.  FAIL


After a Patriots field goal Matt Ryan fumbles on a 3rd and 1 play from the shotgun.  Why don’t you run the ball?  Your running game has been excellent all day and you only need one yard.  Not committing a turnover and keeping the clock running should be the number one priority.  FAIL


New England got withing eight points late in the game but Atlanta had managed to get to the Patriot twenty-two yard line thanks to a spectacular catch by Julio Jones.  After a rush for a loss of one Matt Ryan is sacked on the next play.    Then a penalty on the next play moves the ball to the NE 45 before Matt Ryan throws an incomplete pass on third down.  There was 4:40 left in the game when Jones made his catch.  Why don’t you just run three times, kick the field goal and win the game?  Their running game had been great and even if you don’t get any positive yards you have a very makeable field goal chance and have either forced New England to use timeouts or you burn time off the clock.  Heck, just take a knee three times.  Yes a touchdown is great and you want to run your game plan but passing the ball provides more opportunity for bad things to happen.  Know the situation.  FAIL


Again second guessing will haunt the franchise forever.  For a team who had played so well in the playoffs up until the third quarter they did everything wrong after that to allow New England back into that game.  One talking head after the game stated it best by saying (paraphrasing) Atlanta had “horrible game situational awareness” late in the game.  It really was horrible.  You have to look at the play calling and Matt Ryan’s inability to get rid of the ball, taking sacks and his fumble.  In a vacuum those aren’t the only reasons they lost but those are the ones Falcons’ fans are getting ulcers over today.
The defense had a very good pass rush in the first half rushing just four as the announcers pointed out.  So when the pass rush disappeared in the second half and Brady was shredding their secondary why didn’t Atlanta blitz?  You have to try something right?  They weren’t able to stop the passing game late.  Again you have to look at the coaches to help here.  The defense was on the field a ton and I would think they were tired.   So at least try something different scheme wise.  Why just watch them fail time and time again?


New England, to their credit, did everything they had to mount their historic comeback which was not easy mind you.  In doing so they had 93 plays in this game compared to the Falcons 46 while dominating the time of possession with 40:31.  Reference:  teams average between 59 and 75 per game.  While the offense faltered early in the game it came on with a vengeance in the latter stages.  The defense also came through and were able to get to Matt Ryan and held Atlanta to seven points in the second half.  New England deserved to win this game. They were the better team and should get all the credit coming their way.  Brady deserves his title of greatest of all-time and Bill Belichick deserves to be looked at in the same light.  And that Edelman catch?  How?  What?


I had to type this all out.  It is my therapy.  I have always told folks that if my team makes it to the championship game I’d prefer a blowout no matter what the outcome.  Why suffer?  And last night was the worst case scenario.  The mental terrorism that was that fourth quarter can never be forgotten.  I’ll be fine.  I’m an adult and can deal with this stuff but man why did the Falcons have to make it this tough?  And that Julio Jones catch should be the one seen over and over for years to come but will not be largely forgotten. 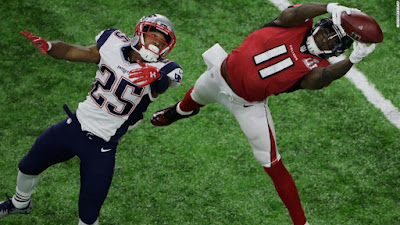