A Look Back at NBA Player Latrell Sprewell 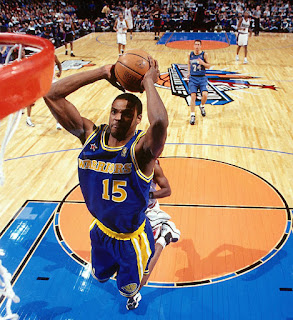 Latrell Sprewell is a guy most folks don’t look back on too fondly.  For me I had a connection with him as he attended, and played for, Three Rivers Community College (Poplar Bluff, MO) while I was a student there.  I get that he had his issues, major issues, and I do not forgive him of those but I am fan (probably contradicting myself there).  To that end I am looking back at his career as I have some other players lately.  Drafted in the first round of the 1992 NBA Draft he is most remembered for choking Warriors coach P.J. Carlisimo.   Sprewell was suspended for the rest of the season after the 1 December, 1997 incident and traded him to the New York Knicks after the 1998-1999 lockout ended. 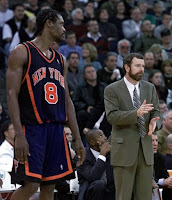 averaged 20 points, 4 rebounds and almost 5 assists per game while shooting 43% from the field (33% 3P).  Sprewell also garnered the All-Star Game MVP in the 1997.  He was a really good player who averaged a career 24 points and 6 assists per game in the 1996-1997 season.  The Warriors as a whole were not good and only made the playoffs or won more than 36 games once in his time with Golden State.  His time there ended with a trade to the New York Knicks for John Starks, Chris Mills and Terry Cummings in January 1999. 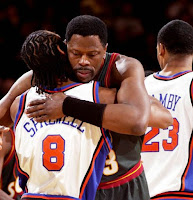 With the Knicks Sprewell moved to small forward and though struggling with injuries helped lead the team to through the playoffs as a number eight seed.  The Knicks surprised everyone by making the NBA Finals before finally bowing to the San Antonio Spurs four games to one.  Sprewell played well for the Knicks averaging almost 18 points per game though his two-point shooting declined while his three-point shot improved.  Sprewell made another all-star team with New York and the team made the playoffs three out of the five seasons he was with the Knicks. 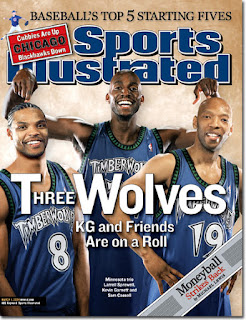 Minnesota Timberwolves as part of a blockbuster that also included Philadelphia and Atlanta.  His play wasn’t up to his career stats and had a career low 12 points per game.  But he did pair well with Kevin Garnett and Sprewell’s first year with the team saw them advance to the Western Conference Finals before falling to the Los Angeles Lakers.  His last year in Minnesota, his career worst statistically, the team won 44 games but did not make the playoffs.  After the season he was offered a three year $21M contract, a $5M per year pay cut.  Sprewell then uttered his famous line “I have a family to feed” and declined the contract.  While Sprewell had other contract offers later in the season he wouldn’t swallow his pride and take the lesser money they offered and never played another NBA game. 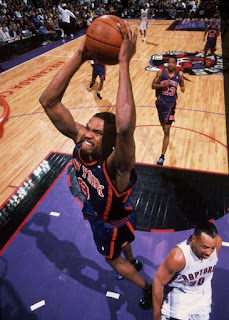 Latrell Sprewell was his worst enemy.  An excellent player he continually found trouble and his image was a detriment wherever he went.  And for the most part his issues made those opinions well deserved.  After his playing days he ran through what money he had and his financial woes are well documented.  Sprewell is definitely one of those players who sabotaged himself over and over which is too bad.  He was so talented and could have been a fan favorite, not the villain he became.  He was seen lately at Knicks games and I was impressed by his statements after the game.  I’m hoping that means he has matured some but that is no guarantee.  I will always be a fan of Latrell Sprewell with the caveat that he isn’t necessarily a feel good story.
Posted by Bulldog at 7:46 PM