A Look Back at NFL Player Williams Andrews 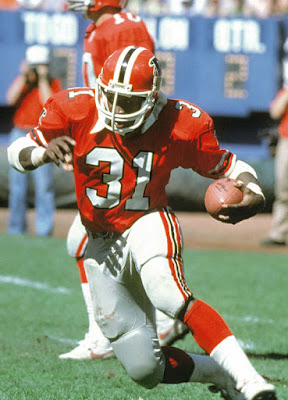 WilliamAndrews is one of all-time great Atlanta Falcons players.  His career was shortened due to injuries but when he was at the top of his game there were few better.  He starred at Auburn University sharing carries with fellow star running backs James Brooks and Joe Cribs.  Andrews has stated this probably helped lessen the wear and tear on his legs during his college days.


His rookie year, 1979, Andrews was the feature back for the Falcons and rushed for 1023 yards averaging 4.3 yards per carry while adding 39 receptions.  This was good enough to earn him a spot on the NFL All-Rookie team that year.  The next season Andrews rushed for 1,308 yards averaging a career best 4.9 yards per carry and caught 51 balls.  Atlanta was 12-4 that season and looked like they could do some damage in the playoffs but lost to the Dallas Cowboys after blowing a big lead late in the first round game.  1980 was also the year he was elected to his first of four straight Pro Bowls. 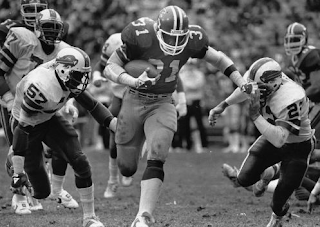 Andrews had another good year in 1981 with 1301 yards at a 4.5 yards per carry clip, 10 touchdowns and added a career high 81 catches for 735 yards and two more touchdowns.  Atlanta didn’t make the playoffs that year but did the next year in the strike shortened 1982 season.  In nine games he averaged 4.1 yards per carry for a total of 573 yards while his 10 touchdowns were good for fifth in the league.  He added another 42 receptions that year.  Atlanta unfortunately lost again in the first round of the playoffs in a close game to the Minnesota Vikings. 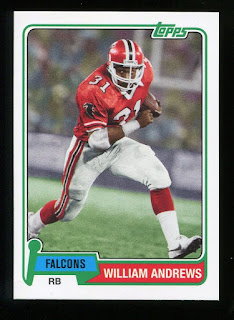 1983 was Williams Andrews’ finest year racking up 1567 yards rushing, averaging 4.7 yards per carry, 59 receptions and a total of 11 touchdowns.  The team struggled as it only won 7 games and missed the playoffs.  In the preseason of 1984 Andrews sustained nerve damage to his knee that would ultimately keep him out of the game for two seasons.  The Falcons also suffered mightily only winning a combined eight games in those two seasons.  Andrews attempted a comeback but was no longer the lead back.  In 1986 he only had 214 rushing yards but still managed to average over four yards a carry.  I didn’t know this but have read that he even played some tight end that year.  1986 was Williams’ last year in the NFL.


He retired owning 19 Atlanta Falcons’ team records and was just the second running back at the time to have two 2,000 combined yard seasons.  O.J. Simpson was the other.  Andrews also had more total yards than any other player during his first five seasons in the league.  It is truly a shame his career was cut short.  It isn’t a stretch to think he could have been mentioned among the all-time greats with just three more healthy seasons.  He finished his career with 5,986 yards, a 4.6 average, and 277 receptions for 2,647 yards.  He was inducted into the inaugural AtlantaFalcons Ring of Honor class in 2004. 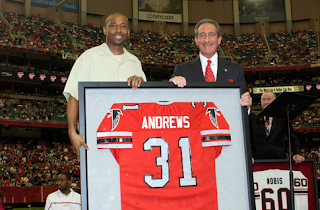 I was 10 years old during William Andrews’ rookie year and he made a huge impression on me and I’ve been a huge fan ever since.  I loved his bruising running style and talent.  He also was a guy who could catch the ball out of the backfield which was a big part of his game.  Andrews will always be one of those “what if he had stayed healthy” guys but his career is still worth remembering and I remember it very fondly.