A while back I purchased my first repack boxes - a baseball and football at a Walgreens for $4.95 each.  This is the football box.  With the football cards I did get many cards from sets I've never actually had before so that was definitely a bonus.

There were 75 cards in the box as well as one unopened pack.  I'd never opened repacks before but had a good idea of what I was in for.  Not a ton of stars but I won't complain.

I probably knew 95 % of the players and there were plenty of names to make it fun.  The Jadaveon Clouney card was definitely a nice surprise but unless you are O.K. with just opening these for the fun of it, I would move along. 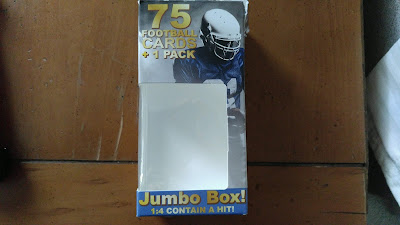 Is it worth the money?  No.  But I enjoyedit and pulled probably 10 cards I'll add to my personal collection.  My next post will look at the baseball repack box.