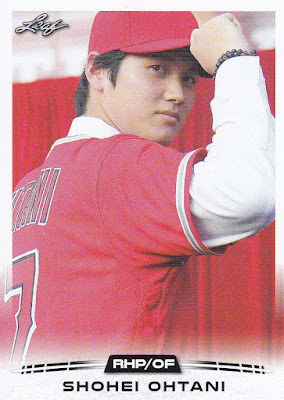 Repack boxes always have an appeal.  Not only do you have the "what cards will I pull?" thrill, you also have the "what packs will I get to bust?" excitement added to the mix.  This box done by the MJ Holding company had 15 packs for a total of 121 cards.  The Triple Play cards were "free" and as we all know that is for a good reason.  I will say one of the Triple Play packs was really weird - but I'll get to that shortly.  Otherwise the box had a good mix of packs.  These boxes also promise a Leaf Shohei Ohtani card.  My Ohtani is to the left.  Nothing special but it is an Ohtani card.  In this post I'll show off some of the highlights of each pack.  On to the packs!

There were five 2012 Triple Play packs giving me 35 cards.  These are give aways for sure.  While they aren't the worst cards in the world they just aren't for me and from what I know they aren't for most people.  The strange thing here is that one pack had been opened, the seven cards replaced with junk cards from the nineties, and resealed with double sided tape.  Very strange especially since these cards probably have about the same value.

Three 2015 Panini Prizm baseball packs netted me 12 cards. I was not familiar with this set.  The cards are bland to me and the cards came out feeling dusty or chalky though they don't bend like most of the prizm/chrome cards.  I did like the Alex Gordon Golden Leather Die Cut. 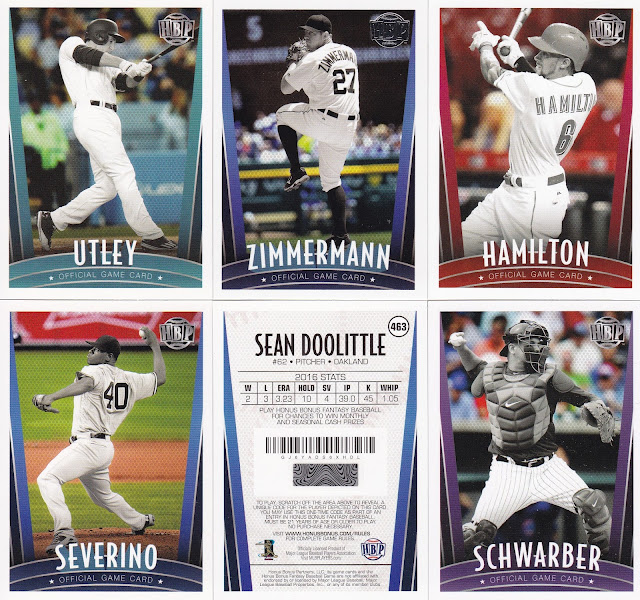 Another new brand to me was the 2017 Honus Bonus Fantasy baseball cards.  There were 16 cards in the two packs.  I guess these were part of an effort to combine cards and fantasy baseball in which you used these cards in conjunction with the company's website.  Different I guess and I did like the Schwarber as a catcher card.  No MLB license so no team logos which is always a downer. 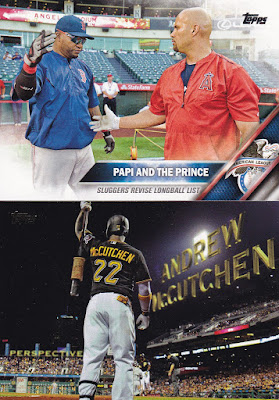 Twelve cards in these two 2016 Topps baseball series 1 packs.  Grabbed a few cards that stood out to me including the Big Papi/Albert Pujols card and an Andrew McCutchen card.  I almost wish his card didn't have his name on the front and the photo took up the entirety of the card.  Still a nice shot and card. 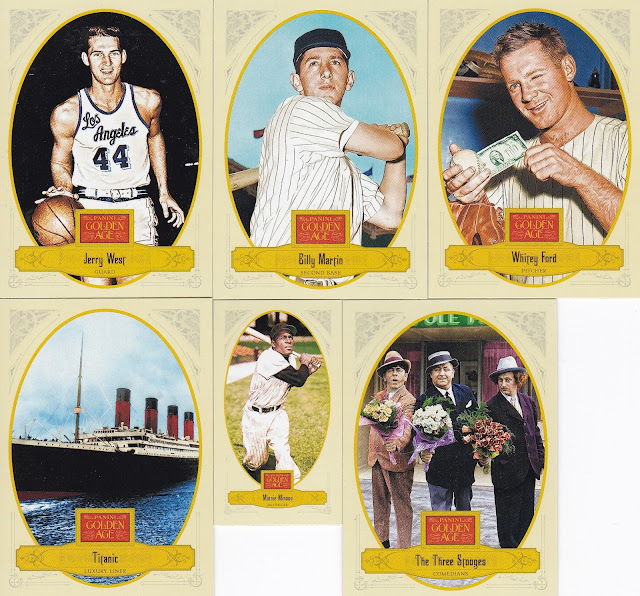 I've heard of the 2012 Panini Golden Age Baseball cards but this pack of six cards is my first in hand taste of the brand.  The cards hit on not just baseball but other sports, history and pop culture from the past.  Nice looking cards here especially the Jerry West I pulled.  There is enough of a variety to keep it interesting though I can do without the minis. 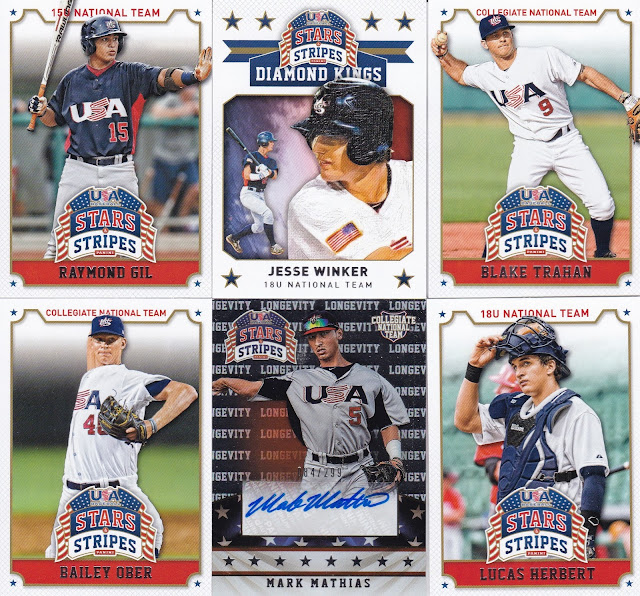 Finally the auto found here in the 2015 Panini Stars and Stripes baseball which highlights USA baseball.  Aside from the Mark Mathias auto I really like the design of these cards. The red white and blue format here really does it for me.  Unfortunately these can be tough as you'll find many who never make it to the majors and as in my case, you may not know any of the players.  Still I enjoyed the cards and even grabbed a Diamond Kings.  Mathias by the way is a 23 year-old minor league infielder for the Cleveland Indians but it doesn't look like he'll see the majors anytime soon if at all.  Still these were really fun to find.

Overall this was a fun break for the $19.95 I paid.  Some brands I was not familiar with and some intrigue with someone snatching cheap cards made this worth it for me.  What more could I ask for?  I won't rush out to buy more but if the budget allows, who knows...
Posted by Bulldog at 5:33 AM