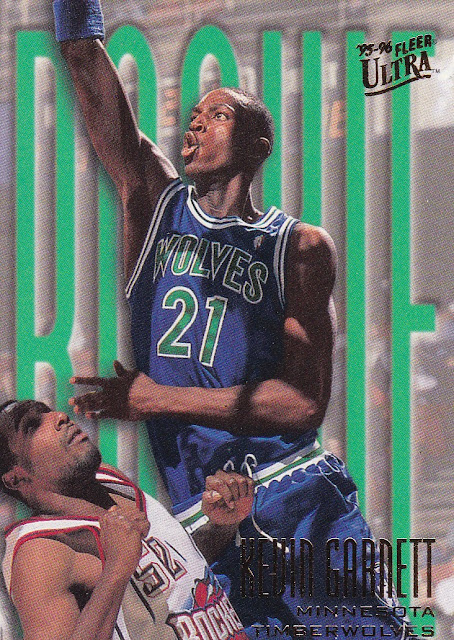 We've lived here now for eight years.  Our house has no garage so our unfinished basement is pretty full with boxes of stuff that hasn't ever been unpacked.  We've started working on cleaning up the basement this week and this is part of the fun I've found.  I have no clue where these 1995-1996 Fleer Ultra basketball cards came from but they are are a fun find and they are in good shape which is never a given.  There were three of these Kevin Garnett rookie cards in the lot which is great.  I've recently added him as PC guy but honestly don't have many cards of his and this is my first rookie card of his.

The base card design gives plenty of room for the photos but I can't say all the photos are that good.  That Payton is a good one but Hakeem does not look like a dream.  Seems like they could have zoomed out a bit on many of their pictures.  Only thing missing in the design would be the team logo.

Again many of the photos just don't click for me.  Eddie Johnson is an all-time favorite of mine so I enjoyed finding him in the stack.  I'm sure Glen Rice is about to drain a three.  Could you imagine him in today's game?  He hit quite a few threes back in the day but I think he'd have quite a few more opportunities today.

The Encore subset are my favorites cards from those I found.  While the photos are in the same mode as the base cards these work better for me.  Maybe it is the background being muted in black and white.  I didn't have the base card for PC guy Detlef Schrempf but I'm happy with this Encore of his.

That Hardaway really sticks out.  Camera guy was able to get a full body shot.  Whose Hardaway yelling to?  Mullin?  Richmond?  Sprewell?

These were all inserts.  I like that USA card.  I may chase down more of those.  Stackhouse's Scrapbook seemed an odd choice for a insert set to me but I know he was a big name coming out of college.  Just don't see him scrapbooking...

The backs have not one, but three different photos from those on the front.  They take up a ton of space so the stats are minimized but still I've seen much worse backs.  These are colorful and we get a nice logo.  Speaking of, we see logos on the fronts of the expansion Toronto Raptors and Vancouver Grizzlies cards which are different in style from the normal set base cards.  Not a bad design and I like how they are differentiated within the set.  The Damon Stoudamire card I really like showcasing that sweet uni.  This was a fun find.  I'll show off some other cards I found later.  Now I'm excited to get back into the basement.  Who knows what else I'll find?
BREAKDOWN:
99 – Total Cards
31 - Encore
24 – Rookie
5 – Toronto Raptors
3 – Vancouver Grizzlies
1 – USA
1 – Jam City
1 – Stackhouse’s Scrapbook