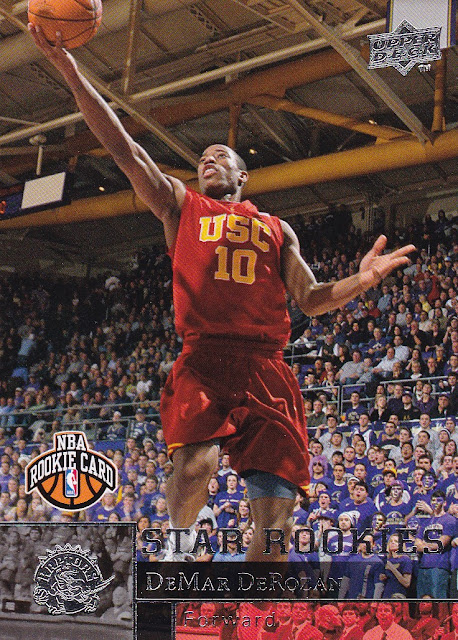 2009-2010 Upper Deck Basketball:   This pack was a fun eBay purchase with the hopes of finding some rookies of current greats as well as stars from years past.  You can find the rookies for Steph Curry and James Harden in this set and you couldn't go wrong with either of them.  While those two didn't show up in my pack  I did snag a nice DeMar DeRozan rookie.  He is a personal collection guy which is a good bonus.  I really wish he had been able to be a part of the Raptors Championship team but alas it wasn't to be.  He is having another great year even as he is still one of the only guards in the league who doesn't shoot the three.

The design is pretty nice.  There is tons of space for the photos to shine.  The player info, Upper Deck logo, and team logo are all in foil on the fronts.  I like that we have both the player number and position included on the fronts.  Simple but appealing overall.  The backs have plenty of color and a different photo than the front as well as stats from each year for the player.  Sweet.  There is also a short write-up.  I really like these backs.

It still hurts wondering just how good Brandon Roy could be if injuries hadn't cut his career short.  Chris Bosh was already a four-time all-star at this point in his career in no short part due to that great hair.  Speaking of hair Dwight Howard was still with Orlando and a beast on the court.  He always had short hair until lately when he kind of went all Chris Bosh with it. 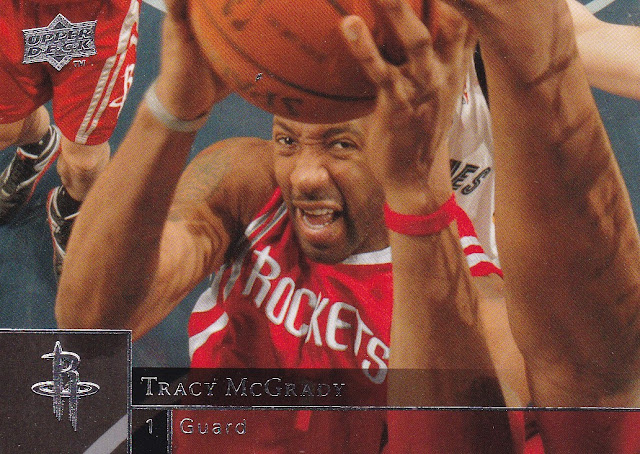 Tracy McGrady's career was just starting to hit the last turn as he'd only play three more seasons.  This was a fun pack and the star power from that year was strong.  One hall of famer and maybe two more who will join him someday.  I like picking up random packs of past seasons and I'll definitely go looking for more from different years. 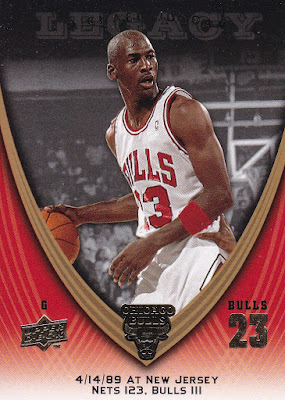 It took me way too long to find out something about this insert mainly due actually being from a 2008-2009 set.  That really was confusing but like most others I enjoy pulling anything Michael Jordan.