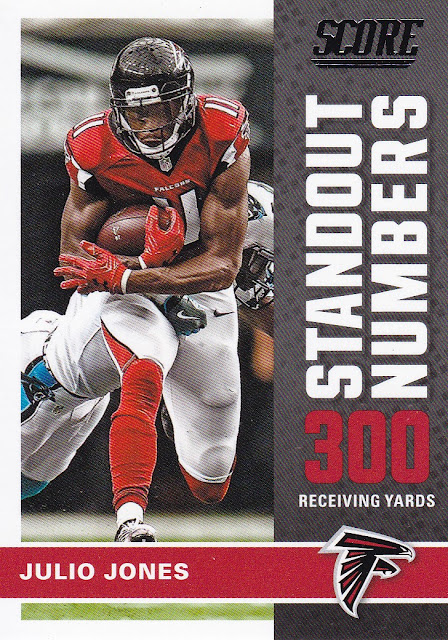 2017 Score Football:  2017 Football is fun to bust thanks to the success of Patrick Mahomes.  I didn't snag him in this pack but it was still a great pack.  Score offers up a large checklist and plenty of inserts so there is something for everyone.  That includes this nice Julio Jones Standout Numbers insert that highlights his 300 yard, 12 catch day on 2 October, 2016 against Carolina.  This was the same day Matt Ryan through for over 500 yards yet somehow he didn't rate one of these insert cards.

A couple of retired greats making appearances is always a good thing.  I like that Namath a lot.  I like the Bradshaw photo and almost wish it didn't get the faded treatment but I get what they were going for.  Richard Sherman will of course be patrolling the secondary for the 49ers trying to win his second NFL championship tomorrow.

A couple of hard luck quarterbacks in Alex Smith and Andrew Luck.  Smith really was good but now it's doubtful he'll ever see the field again after his leg was broken last year.  Andrew luck of course decided to hang it up after battling a myriad of injuries during his career in a shocker before the season started.

Rookies play a big part inthis set and getting to see them in their college unis is great.  Leonard Fournette had a bounce back year with his best year as a pro.  Curtis Samuel has continued to get better each year in the league and topped 50 receptions for Carolina this year.

Eli Manning has retired after what will likely be a Hall of Fame career.

I like Color Rush inserts...I don't like when the uni color is all white.  What sense does that make?

Fitz is a PC guy for me.  I was so rooting him in the 2008 Super Bowl against Pittsburgh.  Watched the highlights of that game this week and it is still hard to watch but what a run they made.  Made me go "wow" pulling that Ryan Shazier card knowing what he went through after that.  That Steelers Drive Team insert now feels 180 degrees different from what it did just a few years ago.  Great pack and tons of fun.  I forget how much I like these.