2013 World Series: Boston and St. Louis Tied at One 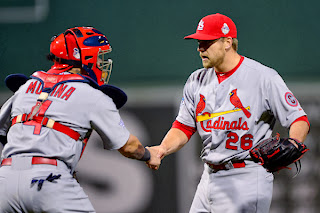 After Boston took game one of the World Series St. Louis wins game two behind another pitching gem from rookie Michael Wacha.  In game one Boston took advantage of some sloppy fielding by the Cards as well as jumping on Adam Wainwright early on their way to a 8-1 win.  This was a great start for the Red Sox.  Their offense, defense, and pitching all looked great.  I thought this gave them an edge going into game two.
Boy I was wrong.    Michael Wacha continued his great postseason run.  His ERA did go up to 1.00 but earned his fourth postseason win (matches his regular season total) in this, his rookie season.  Amazing.  Other than Papi's homerun the Red Sox really had no answer for the stellar rookie.  Again this guy is a rookie who hasn't even pitched 100 combined regular and postseason innings.  I'll stop gushing now but WOW.  This was my worst case scenario.  The young Cardinal pitchers have forgotten how inexperienced they are and continue pitching well.  I really thought the Boston offense could wear them down with their ability to work the counts.  Didn't happen as Wacha, Carlos Martinez and Trevor Rosenthal just mowed them down.
Now Boston starter Clay Buchholz says he "may have one more game" in him.  That is not what you want to hear from your expected third starter as he battles a vague "fatigue" issue.  Now his game three start has been pushed back to game four.  Still everyone's confidence level in Buchholz has just sunk to an all-time low.  Greaaaat.  Boston is probably wishing they had another crack at setting their World Series roster...without Buchholz on it.  So Jake Peavy is now the Boston game three starter.  Shaky in three of his last four starts and after being hit hard by Detroit you have to wonder what he'll give them.  I really like Peavy and hope he can channel some of his past National League success in game three.  The Cards throw another youngster in Joe Kelly at the Red Sox so hopefully the offense can learn from game two and give a better showing tomorrow night.
Game four has Lance Lynn starting for the Cardinals.  He is also doesn't inspire much confidence in his team's fan base.  Both teams have a starter in reserve ready to go if their starters get into trouble early.  Felix Doubrount (Bos) and Shelby Miller know they could be called on early to stem the tide.  This series is no surprise outside of some of the defensive letdowns.  Now that it is in St. Louis, Boston needs to set the tone early in game three and take the advantage.  Knowing they have to face Wainright again in game five, games three and four are critical.  Waino is a tested veteran and I wouldn't count on getting to him two games in a row.  Close series which is anyone's to win and that is all you can ask for.  Well I'll ask for three more Red Sox wins as well...