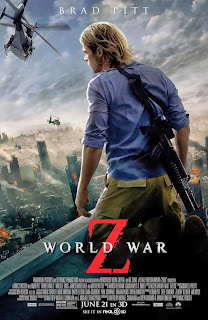 (Spoiler Alert)  Watched World War Z this afternoon and I really enjoyed the movie.  It stars Brad Pitt as an ex-United Nations inspector.  After the zombie outbreak occurs causing all those bitten by the zombies, his character, Gerry Lane, is able to save his family but gets caught up in the U.N. operation to determine what has caused the outbreak while at the same time trying to find what can stop the zombie outbreak.

One of the things I really enjoyed was the quick pace.  I also enjoyed the fact that there was little setup.  Seemed like it was only five minutes (might have been 10) and the zombie outbreak occurs.  Lane is able to keep his family safe through the day and night after the attack until his former boss is able to get them to safety aboard the ship where the effort to save the day is being led.

Lane and special forces start their search in Korea where one of the first zombies is found.  From there his search takes him to Israel where they had fortified Jerusalem against zombies with walls just prior to the outbreak.  Lane learns they had learned of the zombies from a message intercepted from India.  Zombies are able to infiltrate the city and Lane must make a manic getaway aboard an airliner.  When a zombie causes the plane to go down he is able to make his way to a World Health Organization facility to hopefully find a "cure". 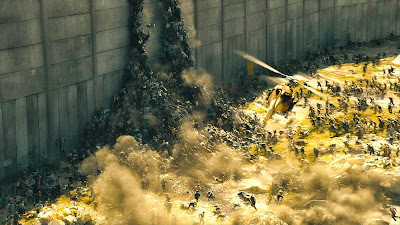 There he takes what he has learned from the U.N., his time in Korea, and what he has seen during attacks he's seen first hand and figures out how to defeat the zombies.  As throughout the movie nothing comes easy but as expected our hero saves the day.

The movie never lingers too much on one part as the film keeps a nice pace.  The zombies are a different portrayal than what we are used to but help make this movie work.  Their ability to run, jump and be physically crazy make you believe that yes they could make such a huge impact in such a short period of time in spite of the weaponry at our disposal.  Brad Pitt played his character well and he really is the focus of this movie.  While his family get some pretty good face time early on he takes center stage.  I was hooked by the trailers for World War Z and always thought I'd really like the movie.  I wasn't disappointed.  I highly recommend World War Z to anyone who enjoys the genre.  The movie is rated PG-13 and while it would be scary to younger children it isn't the gory fare you may see from other zombie flicks.