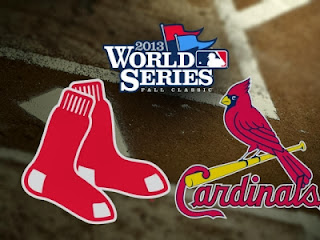 I've watched a ton of Cards games and seen the Red Sox quite a bit.  I won't look at any stats this year.  Just looking at the two teams I give Boston the edge but barely.  I think the key will be the young pitchers of the Cardinals.  Starters Michael Wacha and Joe Kelly and closer Trevor Rosenthal are all young and don't have much regular season experience much less in the post season.  Wacha has excelled so far but I'm not sure how he or any of the three will respond in the World Series.  The Red Sox throw a seasoned staff at St. Louis.  Not saying they are without their issues but I like the starting staff.  The St. Louis bullpen is probably better suited for the series as opposed to their counterparts.  So tight ballgames could be a plus for St. Louis.

The Cardinals get Allen Craig back for the Series but I'm not sure it will be enough.  Their offense is very good and I think they can score against anyone so the Boston pitchers have their work cut out for them.  The Red Sox are great at being patient at the plate and they'll have to be to win the series.  The Boston offense struggled in Detroit and if it weren't for some timely grand slams we would be watching the Tigers host game 1.

I won't be surprised if every game is very close.  I also won't be surprised if it goes seven games.  I love that this is a rematch of the 2004 World Series.  I think David Ortiz and Yadier Molina are the only players returning from that series.  Seems fitting that the two leaders of their respective teams are here again.  As I live close to St. Louis this has definitely been fun.  I only hope for a good series...well and a Boston championship.  Still no matter what we'll have fun.  Saturday I go to a St. Louis sports card show with a good friend.  Not sure yet if I'll wear one of my Red Sox jerseys.  Cards fans are great but I may wait to see how the series is going before I make that decision.  This is what it is all about.  The best teams from each league, a series that seems destined for close games and guys on both sides you can root for.  I just hope the series lives up to expectations.

NOTE:  This was supposed to post before the start of game one but the internet was down until now.  GO BOSOX!
Posted by Bulldog at 8:49 PM