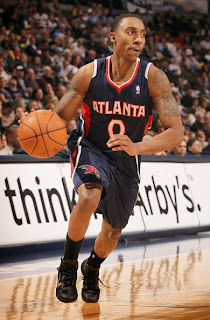 Atlanta cruised to a 44 win season last year but I think the season was seen as a disappointment to fans.  After winning 53 games in the 09-10 (and I complained then about not getting past the second round - go figure) the Hawks have seen Joe Johnson, Marvin Williams and Josh Smith leave the team for "greener pastures".  I think fans would be more than happy with seeing the second round right now.  I, like many, were ok with all three leaving and still think Danny Ferry made one of the best all-time deals when he was able to move Johnson not to mention getting Utah to take on Williams' deal.  Those guys were good but to some extent limited the team.  While rebuilding may not be the right term, this team is definitely moving in a different direction.

This team begins and ends with Jeff Teague at the point.  Atlanta matched Milwaukee's offer to Teague and now he must earn the big contract.  Teague is the Hawks' best point guard they've had in years and I'm glad they kept him around.  He won't have to share the ball with Josh Smith this year so he has a great chance at surpassing his 7.2 assists from last year.  Everyone is high on the rookie from Germany Dennis Schroeder who will backup Teague.  I don't know much about him but I'll take quality depth and the point anytime.  Lou Williams will get the bulk of the time at shooting guard.  He got injured last year but everyone is high on him and expects him to be the scorer they need in the backcourt.  He shot 37% from behind the arc and averaged 14 points per game.  First round pick John Jenkins is expected to challenge for big minutes.  He is 6-4 and can shoot the three.  Again it looks like their could be some quality depth at this position.

Al Horford anchors the center spot once again.  A natural power forward, he is a bit undersized, but you will be hard pressed to find a harder worker which is why he was able to average 17 and 10 last year and make the all-star team.  Paul Millsap was brought in from Utah to fill the power forward role.  This was a great signing.  He is a tough down low and can hit the boards.  He fits well besides Horford on the front line.  Elton Brand was brought in as a free agent and will get minutes at both the 4 and the 5.  He isn't an all-star anymore but I would think he can provide quality minutes off the bench.  Kyle Korver will probably start at small forward.  He can hit the 3 but don't ask for any defense from him.  Still spreading out the defense will help the bigs down low by creating more space.  DeMarre Carroll (another ex-Jazz player) will get minutes as well at this position.  An athletic kid who may be asked to play defense when needed at small forward.

The biggest acquisition may be new coach Mike Budenholzer who comes from San Antonio.  Hopefully he can bring some of his winning ways from the Spurs.  Atlanta definitely needs someone who can take Atlanta to the next level. They've been a team that can make the playoffs.  Now they need to make some noise once they get there.  Coaching will be a big part to that.

I like this team as built especially the depth they have.  Not a knock, but not having Josh Smith handling the ball should help Jeff Teague and the rest of the offense be more comfortable in their rolls.  Jeff Teague must be at least as good as he was last year and be able to involve everyone in the new offensive schemes brought in by Budenholzer.  I won't expect huge strides this year but I think they can win 46 games and hopefully land a number four seed.  Might be asking for a bit too much  but again I like the makeup of this team.  We'll see how all the changes look on the court.