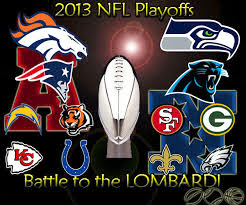 My season preview (here) didn't exactly match up with how the playoffs have come out but I won't complain.  In the NFC I had Atlanta as opposed to Carolina in  and missed on Houston and Baltimore in the AFC where San Diego and Kansas City made it instead.  So not great but not too bad.  Oh, and in my preview I picked Denver over San Francisco in the Super Bowl.  Still a matchup that can come to fruition.

Now that we know the matchups I want to have my say.  I can't argue with the two top seeds, Denver and Seattle, meeting in the Super Bowl.  I'd give the win to Denver.  That said Peyton will probably have to get past Tom Brady which is something he has always had problems doing.  Seattle will have to get past teams, whoever it may be, that can beat them on any given Sunday.  But I get ahead of myself...

KC @ Indy - I love the Kansas City story but I think it ends here in a tough game.  Even if Indy handled them easily in the regular season the Chiefs should make this a tough game though the Colts will probably win by a touchdown.  Indy has played well as of late and the Chiefs have been struggling.  That isn't the end all but I'm just not convinced the Chiefs have enough going for them right now to win.

New Orleans @ Philly - Philly has it all going right now.  They are hot thanks to their impressive new quarterback in Nick Foles.  This team had all kinds of talent before Foles stepped up.  Now they seem to have the whole package though the defense could be their one weakness.  New Orleans doesn't play well away from the bayou and will now have to play in frigid temperatures.  The Saints has the offense to win this game but I'm not convinced it will translate in the cold.  At least not enough to keep up with Philly's offense.  If this is played in New Orleans I'd probably think differently.  I'll take the Eagles to win.

San Diego @ Cincy - Cincinnati should win this somewhat easily but I doubt it will quite go that way.  Still I think they win.  San Diego played well enough to get into the playoffs but I don't think they can win.  The Bengals are also very good at home and I don't think Andy Dalton will throw four interceptions this week which is what it will probably take for the Chargers to win.

San Fran @ Green Bay - Hard game for me to pick.  With Aaron Rogers back Green Bay is a team that can win against anyone.  They don't seem to play well against the 49ers for some reason - yeah the very good defense might be why.  I'm thinking that in the cold Rogers and the Packers will win this game though it should be very close.  Their defense is banged up and will have issues shutting down the 49ers.  I also keep thinking Kaepernick will have that one playoff game where he isn't up to the pressure.  This might be it.

On a non-analytical note.  I have no rooting interest this year as no team of mine (Atlanta, Buffalo) nor my wife's (Chicago, Pittsburgh) are in the playoffs.  Doesn't matter because I'm one of those fans always excited about football and the playoffs are the pinnacle of that.  I always find someone to root for.  This year is tough.  I normally like to see teams who haven't won before or underdogs win it all.  To that end, a SD/Cincy-Seattle, SD/Cincy-Carolina Super Bowl would work for me.  Kansas City is a team I would love to win one.  They have been a tough luck team for a long time.  Then there are those players I would root for.  As an admitted Tom Brady man crush guy I would love for him to win his 4th Super Bowl and enter that elite quarterback club with four victories.  I also like Peyton Manning, I mean who doesn't, and would love to see him win his 2nd.  Phillip Rivers, Wes Welker and coach Andy Reid would also fall into this category.  So it gets complicated for me.  There are very few scenarios that will disappoint me.  I'll let the first round play out and maybe I can latch on to a team then.  Right now it is just too wide open.  Hopefully we'll have an exciting playoffs and a great outdoor Super Bowl.  I'm excited!
Posted by Bulldog at 2:12 PM