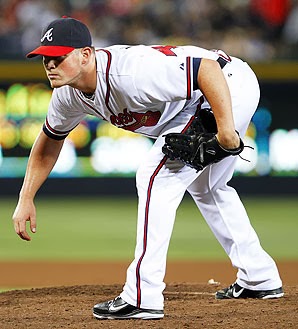 The Atlanta Braves signed Craig Kimbrel to a four-year contract for $42 million dollars.  Incentives for All-Star appearances, MVP and Cy Young voting can add bonuses of up to $3.5 million dollars.  Atlanta has a team option for 2018 for a price of $13 million.  The signing allowed both sides to avoid arbitration.  To me the numbers seem like a great deal for both sides.

I love this move.  I believe a closer is crucial to any team.  Since they pitch only one inning nowadays it is hard to say they are more important than setup pitchers but as they are in there in the 9th inning they get the press.  And if a team doesn't have a good closer it can make for a long season.

I had to endure watching the Braves of the nineties, specifically the early years, struggle with no proven closer.  Nothing worse than going to the last inning of a game after your starters give you a very good game only to see it all be for not due to the lack of a quality closer.

To that end, Craig Kimbrel is not a quality closer.  He is a dominant closer.  In three years as the Braves closer he has a 1.48 ERA, 11 and 7 record, 138 saves, 206 innings, 341 strikeouts (14.9 SO/9),  and a WHIP of .871 in 210 games.  Assuming no injuries or significant fall off in performance Atlanta has one of the most important pitching positions set for the immediate future.  Atlanta does not have the deepest pocket books so this is a huge signing for the Braves.  After locking up Kimbrel, Jason Heyward and Freddie Freeman to multi-year deals Atlanta is trying to ensure some stability for a team that won 96 games last year.  Great off-season for Atlanta.
Posted by Bulldog at 10:43 AM