Book Review: The Breaks of the Game by David Halberstam 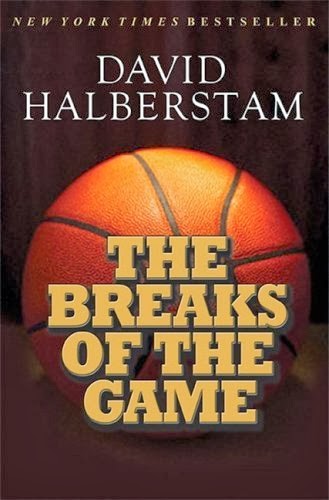 The Breaks of the Game by David Halberstam follows the season of the 1979-1980 Portland Trail Blazers.  This book is a great read for anyone who enjoys basketball.  Being a Trail Blazers fan it resonates with me more than most but that doesn't change how good this book is.  You can read here Bill Simmons' thoughts on the author and the book upon David Halberstam's death in 2007.  I read the paperback version which is an oversized paperback containing 400 pages.

While the book is centered on the 1979-1980 Trail Blazers team the book encompasses so much more.  The catalyst for much of the book is the team's heart and soul, Bill Walton, signing with the San Diego Clippers just prior to the season.  This is two years removed from Portland winning the NBA championship.  He leaves amongst much angst on both sides.  Bill Walton was maybe the best player in the league when healthy but health was something he would never have much luck with.  But he isn't the what the book is about but he is a key figure in it.

Coach Jack Ramsey and the rest of the team is what everything revolves around.  The team is in flux as new players come in from San Diego as compensation for the Walton signing.  Some players, key components in earlier years, are now older and injures are taking their toll.  Young players compete for minutes and their NBA life. The owner of the team, the general manager, scouts and even the doctors and trainers also play key rolls in the book.  Halberstam also weaves other key players from the NBA into the book.

Halberstam does a great job providing the back story of not just each player but of the recent past of the league and key players around the league.  All important to where the league is in it's maturation process.  He does a good job of covering the league's transition to a predominantly black league and the struggle black players endured even into the late 70's. But again this was only one of the many important details touched on that make any season a long journey with many twists and turns.  Portland had to work through them all whether it be salary negotiations, egos, injuries, and playing time to mention just a few.

Again Halberstam does a great job weaving the back story of each player into how they are not just a player but a person.  You really get to know each player and feel more connected whether reading about rookie Abdul Jaleeni, veteran Maurice Lucas or phenom Billy Ray Bates.  He does a great job of not taking sides allowing you to make your own decisions on each individual.  For me they all came off as likable people who are just different in their own right.  None were bad or wrong.  They were just individuals and their stories were all great ones that really allowed me to connect with each.

My one and only thing I take issue with is the lack of photos or statistics.  When published in 1982 there was no access to the internet so putting a face with the name was not so easy.  As a fan I'm familiar with many of the players but would have liked the photos and stats for quick reference.  This is a very small point and in no way takes away from the book.  I'm a big stats guy so I love looking back to see how things played out on the court in numbers.  I just kept my 2001-2002 Sporting News NBA Guide handy (a must for the NBA fan prior to the internet).  I was also surprised how there was little mention of rookie and first round pick Jim Paxon who in later seasons would be the star of the team.  On a team with so many guard problems such a disappointing rookie season would have been a huge concern to coach Ramsey and Trail Blazer management.  Paxon of course would go on to a brilliant career in Portland and is beloved by fans for his time on the team.

Basketball fans should read this book.  It is as good as advertised.  While it is Trail Blazer centric it touches on so much more and is just so well written it deserves the time.
Posted by Bulldog at 3:44 PM