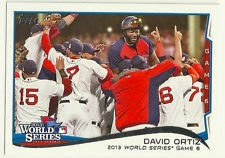 Baseball spring training is drawing near which means only one thing - baseball trading cards hit the shelves!  I picked up my first pack today, a Topps baseball series 1 rack pack (also called jumbo pack) containing 36 cards for $4.98.  I received a mixture of the base set that included league leaders, special recognition cards, rated rookies and future stars.  Also included were the different inserts among which I pulled red foil, blue border, green border, die cut mini, upper class and future is now cards.

The front of the cards have a white border, both portrait and landscape in variety, the player's team emblem in the bottom left hand corner, the player's name in silver at the bottom right with their position in a silver filled circle above that, and the team name is located on the right in a die cut looking area going from top to bottom. 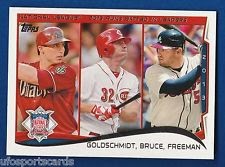 The back contains all the stats you could want including minor leagues for the younger players.  Categories include G, AB, R, H, 2B, 3B, HR, RBI, SB, BB, SLG, OPS, AVG and what I think is the first time I've seen on a card, WAR.  Personal information includes Ht, Wt, Bats, Throws, Born (Date and Where), Home, Drafted, and Acq.  At the top of the card is the player's name in black, team name in appropriate color to the upper left with their position approximately center at the top in small black letters.  The card numbers is in black in the upper right of the card.  Under those items is a team colored swirl for lack of a better term.  A rookie fact line is just below the personal information which was next down with all of that followed by the stats.  The appropriate Topps logo, trademark info and MLB and players union info is at the bottom of the card.  ﻿

The card fronts are ok but definitely not something that blows me away.  Maybe I'll just say they are average.  There just isn't anything special here that wows me.  The logo is nice and sharp but that is about the best thing I can say for the design.  The pictures were great though.  Plenty of action shots to go along with the standard standing poses.  But again the quality is there.  Topps has been real good with their photography of late.  Definitely not something I can complain about.  The backs are fine but again nothing special.  The addition of the WAR stat is the highlight there.  Other sets, whether of baseball design or other sports, sometimes add a different or the same picture on the back.  Sometimes in color, black and white or even as a subdued background.  At least it is different.  If you aren't going to add a picture or logo at least make the back stand out with color.  Again all this is lacking from this card.

I was very happy with the cards I pulled.  My favorite by far is the Yadier Molina card.  That look is priceless.  I'm in the St. Louis area and have grown to like Molina as the great catcher he is.  So this was a very nice card to get.  I also pulled the Cardinals' Jaime Garcia which I probably won't be able to give away.  Three of my Red Sox were in the pack to include the awesome World Series Game 6 David Ortiz card.  I love the picture and it of course brings back great memories.  From the Braves I have the Jason Heyward card with the beautiful looking catch as well and the National League leaders in RBI's card featuring Freddie Freeman.  Of the inserts the Bryce Harper card was by far the nicest looking card.  I'm not sure what you'd call what they did with the picture but I find it very cool.  The others were ok but nothing to write home about.  The mini die cuts are 1989 Topps replicas.  Not the most sexy card in the world but it goes along with what Topps has been doing for some time.

Not sure I'll pick up another pack but who knows.  I only have Wal-Mart as a source for cards nearby to me so I may be stuck with these.  Hopefully some of the different Topps varieties will be available here or in other Wal-Marts soon.  Looking at the checklist there are some cool cards with retired players on them.  These usually peak my interest so I'll probably try to track some of these down.  I would never tell anyone not to pick up cards.  So with these I'll say to pick up one pack and see what you think before you sink too much money into them.  ﻿