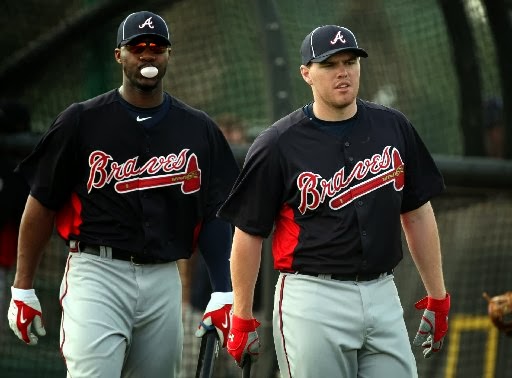 The Atlanta Braves avoided arbitration with first baseman Freddie Freeman and outfielder Jason Heyward by agreeing to extended contracts.  Report have Freeman receiving $135 million over eight years while Heyward will get $13 million for two years.  I really like both moves for Atlanta.  Both are great young talents and not having to worry about contracts for either in the immediate future is nothing but good news for the Braves.

Freeman has been as good as advertised at first base.  In three years he has averaged .285/.358/.466 while hitting 20 plus homeruns each year while topping 100 RBI's for the first time last year.  Freeman was also 10th in the majors in WAR last year while also second in batting with runners in scoring position.  Freeman has shown he is worth the approximately $16 million a year he'll be getting.  I think it is important to lock up young players who have shown they can play good ball consistently.  Assuming Freeman's numbers don't fall off dramatically I think Atlanta will be happy at the end of this contract.  He is 24 years-old so his best days should be ahead of him.

Heyward has had a little different story in the majors having to fight through injuries to include missing 58 games last year.  His career averages are .259/.352/.443.  He has 73 homeruns over his first four seasons.  This two year deal gives both sides time to better assess what Heyward will be in his career.  If he can stay healthy and put up big numbers the next two years it will pay off with a big contract.  To that end I would have been comfortable with Atlanta locking him up for more years but this probably makes sense for both sides.  He is only 24 so no one probably knows quite yet who Jason Heyward the player really is.  After returning from injury last year he was put in the leadoff role and did well.  Hopefully that bodes well for his future.
Posted by Bulldog at 10:38 AM