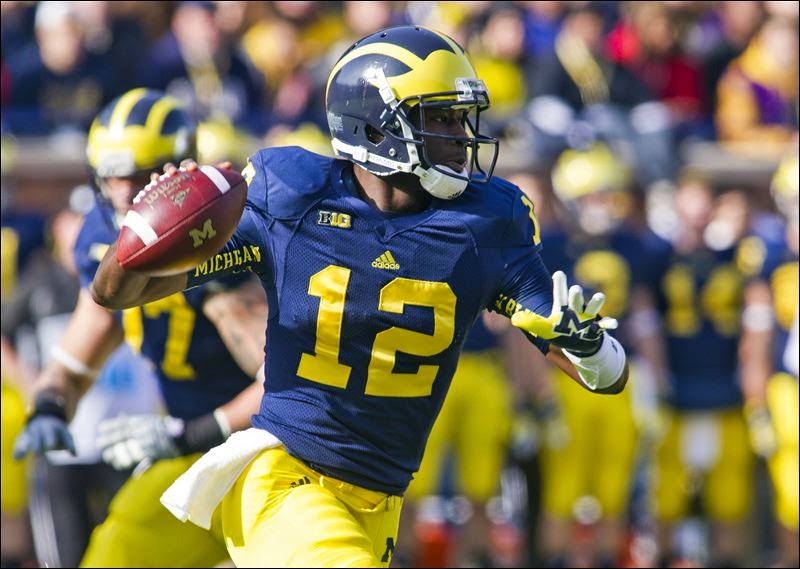 Michigan comes off a disappointing 2013 season where they went 7-6.  To improve on that they'll need the offensive line and running game to be better (102nd in the nation).  The running backs who'll take the lead in the backfield this year rushed for under 400 yards combined last year.  Hopefully someone can win the top spot and shine.  Devin Gardner is capable at quarterback and can also use better protection from the line.  He led the team in rushing but I'd like to see him with more time in the pocket.  I think Michigan has a decent receiving corps so if Gardner has time to throw he has options.

The defense started out strong last year but faded down the stretch.  The team lost six of their last eight games and it could be said the defense was the reason in at least three of those losses.  Michigan has a good linebacking corps and returns a total of eight starters from last year on defense.  They also have one of their biggest recruits in years joining the defensive backfield in Jabrill Peppers.  Hopefully he can have an affect right off the bat.

I think Michigan can be a nine win team but those areas I mentioned needing improvement must get better.  The Big 10 isn't what it used to be but it is still the toughest part of the Wolverine's schedule sans Notre Dame in week 2.  This still isn't up to Michigan standards but I think that nine wins and a bowl win would be a good year.  I really like head coach Brady Hoke and think Michigan can be a top 10 team but they just don't have the talent right now.  I hope the athletic department is patient enough with Hoke to let him and this team get there.  For now I expect this to be a season with many close games.  Hopefully some of them go Michigan's way.
Posted by Bulldog at 9:00 AM