Kevin Love to the Cavaliers 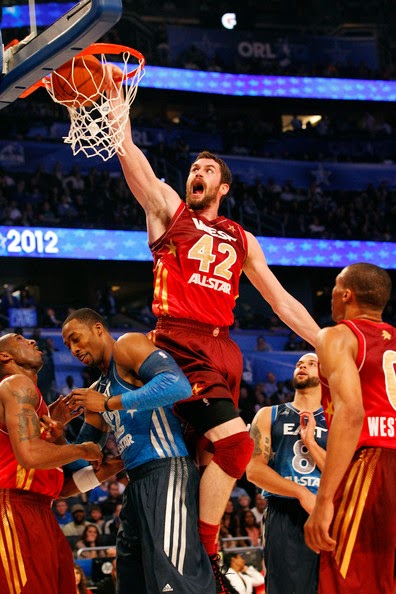 I like this trade.  True it isn't 100% a done deal yet but it is very close to it.  Kevin Love will go to the Cleveland Cavaliers for Andrew Wiggins, Anthony Bennett and a protected 2015 first-round draft pick.  First I have no issues with teams in any sport trading prospects and picks.  These have both proven nothing at the pro level yet and if you look at any draft stats you'll see even first round picks are a crap shoot.  Bottom line is you are trading a "maybe" for a proven player in a trade like this.  In this case both teams could end up "winning" but only time will tell.

If Wiggins ends up being the player everyone thinks he can be Minnesota did well.  Bennett only has to be average considering the failure that was his first year in the league.  The future pick is bound to be a late round pick which to me is really a throw in.  To some extent I'm surprised this is the best deal the Timberwolves could get.  But again if Wiggins plays up to his draft status he'll be a future all-star they can hang their hat on.  To me the key is Bennett.  I think Wiggins will get his points but will Bennett rebound and actually be a plus for this team?  The Timberwolves haven't seen the playoffs in a long time and do hope this trade works out for them.  No matter what happens, Minnesota did well.

Cleveland has to be the obvious winner here.  LeBron James is in his prime and with having Kyrie Irving  on this team Cleveland has to be the favorite to win the East.  Indiana has lost it's star, Miami no longer has LeBron but could still be the 2nd best team in the East though Chicago will challenge for that spot, and while I like Washington and Toronto I'm not sure either is ready to take the next step.  Being their first year together the new "Big 3" may struggle some but I expect as they are proven veterans they will weather the storm.  LeBron is the only one of the three with playoff experience so when they get to the playoffs they may again see some rough spots.  This was the move to make.  They can contend now and in years to come without having to wait on Wiggins to blossom, assuming he does.  I'm also making an assumption that Love will sign that long term contract extension.  I don't know why he wouldn't but we've seen weirder things in the NBA.

Many are trying to say Kevin Love is overrated.  He is a guy who has played on bad teams with few options but I think he is the real deal and is one of the top 10 players in the league today.  Is it true he scores as much as he does because his teams haven't had other viable scoring options?  No doubt.  That doesn't mean he isn't the embodiment of a stretch four.  He is a career 36% three point shooter and averaged 13+ boards over six seasons.  He has average dover 20 points per game in three seasons while he scored 26 a game in two of those.  I think the bottom line is Kevin Love is a proven power forward who should be a great fit with LeBron James.  He is an adept passer and can hit the boards and spread the floor.  All these attributes should be a perfect fit.  See a good breakdown of the Kevin Love "is he overrated" discussion here.

Again this is a good trade for both teams.  Cleveland has a player they can sell as the future of the franchise and LeBron and company should be able to compete for the Eastern Conference title as soon as this year and probably for years to come.  I'm excited to see what the Cavs can do and hope we'll see the Timberwolves make a playoff run in the near future.
Posted by Bulldog at 9:00 PM