NCAA Board Votes To Allow Autonomy 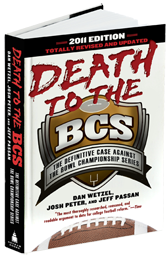 Some time ago my buddy Yaj gave me the book Death to the BCS.  A great book that I really should have reviewed then.  At it's core the book blows away all the reasons the NCAA and schools have against a playoff to determine the college football national champion.  I consider myself a knowledgeable fan but this was a real eye opener.  If you haven't read it do so now.  Though we now have a playoff starting this season this book is not outdated.  For me I saw how the power conferences and colleges really rule the college football landscape while the NCAA has almost no power.  This has been so evident in the last decade as the conferences have added teams to create "super conferences" furthering the divide between the haves and have-nots while the NCAA has done nothing.  Bleacher report broke down the book by chapter which you can see here.

This month the NCAA basically gave the big five conferences carte blanch to do what they want at the expense of the all the other schools.  Yes, decisions can be overturned but I think this can only widen the division between small and big market teams.  I do understand that there is a difference between Alabama and teams like Georgia Southern and New Mexico State.  But if there isn't more oversight, with some power behind it, I think this will go down hill for the small institutions.  If the Ohio State's of the world can make up rules that allow them to provide benefits to players smaller schools are doomed.  They can't keep up and some players who may have gone to small school U. because they believed they might be able to star may now want to take the money if that means they are only the number three player at their position at a big name program.

I know this is a simplistic view.  I just don't think an organization this big, that is so complicated can continue to thrive without major issues with no real power at the top.  I don't think we'll ever get to a point where there isn't a championship in some way, shape or form but again I can see one where the major conferences pretty much do as they please at the expense of others.  While any actions they put in place can be voted down there is nothing to stop them from just going out on their own if they choose.  This is way too much power and you don't see it anywhere else in sports.  The NCAA has virtually no power here.  How can it continue to succeed?  Only time will tell but I'm not real optimistic.
Posted by Bulldog at 9:00 AM

Email ThisBlogThis!Share to TwitterShare to FacebookShare to Pinterest
Labels: Death to the BCS, NCAA