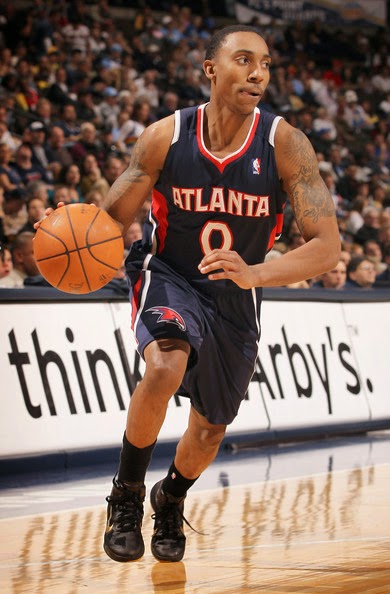 The Atlanta Hawks are coming off a 38-44 season under new coach Mike Budenholzer.  Al Horford tore a pectoral muscle and missed all but 29 games dooming any hope the Hawks might have.  This netted them the final Easter Conference playoff spot and a first round matchup with the Pacers.  The series was hard fought and it looked as though Atlanta would win it but they fell in seven games.  Atlanta made a late push for the final playoff spot and I have to admit I wouldn't have felt too bad if they'd fell into the lottery and possibly gotten one of the big players in the stacked draft.  Probably not the best thing to say but the Hawks need more scoring and it wasn't there when they drafted in the first round.  While they did draft power forward Adreian Payne and added defensive specialist Thabo Sefolosha this year's team will pretty much be the same as it was last year.

The offseason was tough as the under the radar Hawks had to take front row and center in dealing with racially insensitive remarks from general manager Danny Ferry and owner Bruce Levenson.  The latter is selling his controlling interest in the team.  While this didn't rise to the level of the Donald Sterling ruckus, it does not help a team that already deals with the perception of not being somewhere NBA free agents want to go.  Hopefully the team can move past this somewhat quickly and keep the attention on the court.

Point guard Jeff Teague returns after a year in which he cemented his status a true point guard who can lead this team.  He averaged 16 points, almost 7 assists, and shot 46% from 2 range but only 32% shooting the 3.  I'd like to see his 3-point percentage increase so guards have to respect that shot more.  Shooting guard Kyle Korver averaged 12 points a game while leading the league in 3-point percentage at 47%.  While I shouldn't complain I'd like to see him take more shots while increasing his scoring output.  Twelve points a game from your shooting guard just won't cut it for me.  Shelvin Mack (PG), Sefolosha (SG), and Kent Bazemore (SG) will all come off the bench.  Again I'm not sure I see the scoring I want here.  Teague is good right where he is at but to me my starting off guard should be putting up 15 points a game.

In the front court Demarre Carrol returns as the starting small forward after having a good year - 11 points, 47% FG, 5.5 RPG, 1.8 SPG.  Again less scoring from a wing than I'd like to see.  Sefolosha and rookie Lamar Patterson will also get minutes here.  Power forward Paul Millsap had an all-star year.  He averaged 17.9 points and 8.5 rebounds a game and added some range hitting 35% of his three pointers.  Mike Scott returns and the rookie Payne will also get minutes behind Millsap.  My thinking is Payne was drafted as the long term solution at this position.  Millsap is a free agent after this year and I wouldn't be surprised if Atlanta thinks he may be too expensive to keep.  Al Horford returns to anchor the middle.  While undersized he is a tough player and if he can average 18 and 8 like he did last year it is a win.  Pero Antic was a nice surprise last year with Horford out so he should be fine as his backup this year.

Still too early to make a determination on coach Budenholzer.  Thirty-eight wins isn't much to write home about.  This year the team has to move forward.  It will be year two in his system and they'll have Horford back.  I still worry about scoring.  Most teams have a wing guy to pick up the scoring while Atlanta relies on their bigs and Crawford.  I'm not saying it can't work, see San Antonio, but I just don't see Atlanta doing better than a 6th, maybe 5th seed as constructed.  The Eastern Conference isn't great but I think there are teams who are better and getting better.  I'm not sure I see Atlanta with that group.  Still I think they improve this year and probably get above .500.  I do look forward to seeing what they can do and who knows.  Maybe things can fall their way some and they'll be a surprise team in the East.