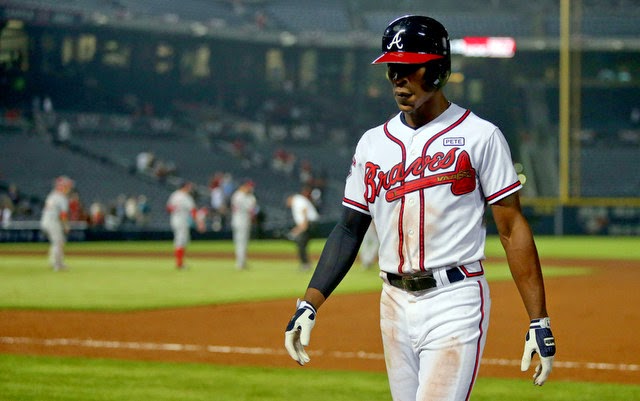 The Bravos finished 17 games back of the Washington Nationals with a 79-83 record and didn't make the playoffs.  This and the fact the team hasn't won a postseason series since 2001 cost general manager Frank Wren his job.  The Braves had problems in different areas but the lack of scoring has to be the biggest weakness this team has.  Only the Padres scored less runs than Atlanta.  The offense was just anemic.  Whoever is hired to replace Wren has to help figure that out.

Wren's best move of the year might have been cutting ties with Dan Uggla though the Erwin Santana pickup was a big boost to the starting staff.  Though Santana's signing came at the cost of a first round pick so I'm not sure how much of a win that is in such a down year.  I wish Atlanta would do the same with B.J. Upton.  He is horrible and getting worse but there were other holes in the lineup too.  Andrelton Simmons has massive skills on defense but he regressed at the plate.  Atlanta has to find someone who can help Simmons and Upton improve at the plate.  The pitching also had issues as it took big hits before the season when Kris Medlen and Brandon Beachy were sidelined with Tommy John surgery.  Mike Minor also missed time with shoulder surgery and wasn't the same after his return.

All wasn't bad though.  Evan Gattis, Craig Kimbrel, Justin Upton, Julio Teheran and Aaron Harang all had good years.  The bullpen is in good shape so hopefully the offseason can concentrate on getting the offense right.  This isn't the first year the Braves have had issues with the offense.  At some point it has to get better.  Right?  Still it was a lost year that looked promising early but a late season collapse doomed the team.  Here's hoping Atlanta can find some offense somewhere this offseason whether that is through free agency, the minors or within the lineup itself.
Posted by Bulldog at 7:30 AM