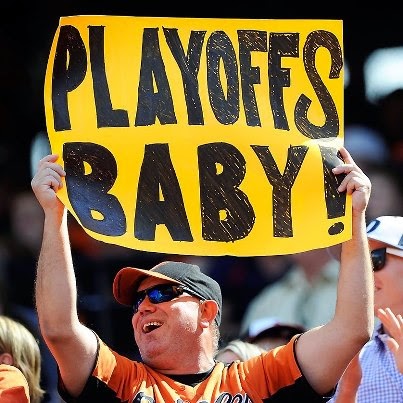 I've been out of town for almost two weeks and saw only 9 innings worth of the baseball playoffs.  Luckily it was the first 9 innings of the thrilling Kansas City - Oakland wildcard game.  And what a start to the playoffs it was.  I didn't expect either of the upcoming championship series matchups but here I go: 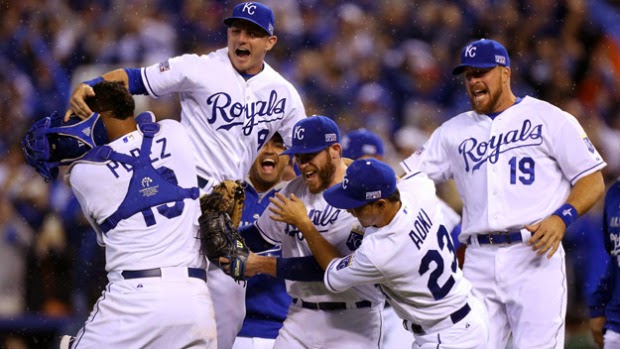 Royals - Orioles - Let's get this out of the way - I'm all in on the Royals' bandwagon.  Hopefully they can pull off the miracle and get to the world series.  It was one thing to beat Oakland in a one game series but they swept who I thought was the best team in the majors - the Angels.  How the heck did that happen?  I didn't get to see the games and the recaps and boxscores don't do it justice.  This was a huge upset.  Now how good are they and can they keep it going?  I think they are good enough to win against Baltimore.  The talent is there.  Still they'll need to play at the top of their game every game for any chance at advancing to the World Series.  Again I love this team and want to see them win but no matter how good they've played to this point it is hard to see them getting past a superior Orioles team.  Of course I would have said that a week ago prior to the Angels series had I had a chance to post my thoughts...  Still I'd love to see them in the World Series and even better to see them kick the Cardinals butt in a rematch of their last playoff/World Series appearance in 1985.

Baltimore has flown under the radar most of the year.  About the only thing their offense didn't excel at was anything involving speed.  Their power numbers were near the top while also being 5th in the AL in average.  The pitching was 3rd in the AL in ERA though their starters (Chris Tillman, Wei-Yin Chen, Bud Norris, Ubaldo Jimenez, Kevin Gausman) probably don't strike fear in most fans when they hear their names.  Still they and their bullpen helped this team win 96 games while no one outside Baltimore paid attention.  They have a good offense that can win with the long ball.  I think this is the better team.  Kansas City should give them a good series assuming they don't wake up and remember they are the Royals.  I think Baltimore wins in 6 games and think it would be a great story considering the Orioles haven't been to the Series since defeating the Phillies in the '83 Fall Classic. 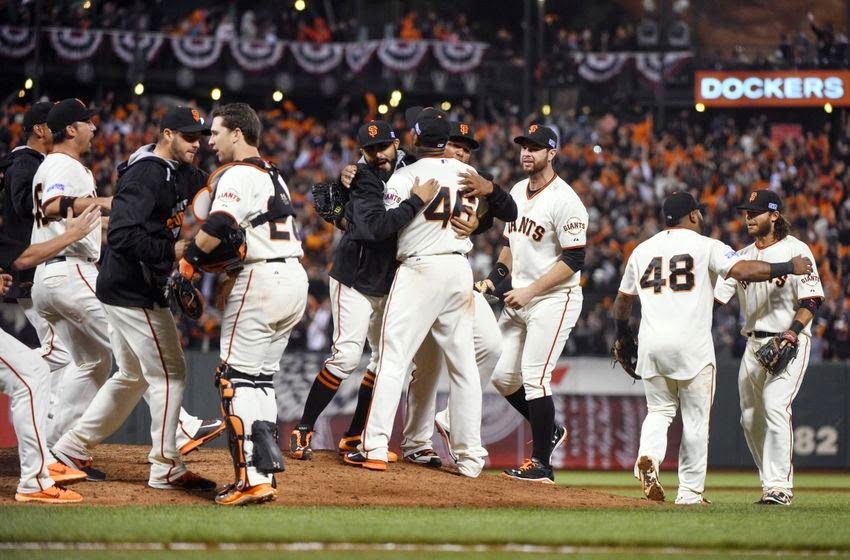 Giants-Cardinals - I really thought we'd see the Nationals in the championship series.  That said the Giants are a good team and have experience plus two of the last four World Series championships.  Good starting pitching here led by Madison Bumgarner and I can't wait to see the game 1 matchup versus Adam Wainwright.  I'm not sure I can quantify how but I think the Giants are the better team.  Look at the records of their starters and two have losing records.  Go figure.  Jake Peavy has been a great pickup as a starter and their bullpen has been very good sans some bumps in the road at closer.  Buster Posey, Hunter Pence and Joe Panik lead a good offense that doesn't have a 30 homerun guy but many in the lineup can hit a homer at anytime.  I like the balance here on offense and in their pitching but I see a hard fought series that goes 7 games.  Bruce Bochy is one of the best managers going and I think that will help the Giants win this tough series.

Living near St. Louis, and not being a Cardinals fan, I have Cardinals fatigue.  It is fun needling my buddies when the Cards struggle but that hasn't been much this year.  From about the mid point of the season St. Louis hit it's stride and look as good as anyone coming out of the National League.  Not a star studded offense and a relatively young starting staff this team is easily overlooked.  Still Wainwright and John Lackey help steady this staff along with stud catcher Yadier Molina.  The offense struggled mightily at one point this year but caught their second wind and while not sexy are scrappy, if not productive.  Mike Matheny is young and is questioned often here locally but this is his third straight championship series so he is doing something right.  Again I like the Giants here but St. Louis has home field advantage and should push them to the limit.  Should be a great series no matter how it comes out.
Posted by Bulldog at 8:36 PM