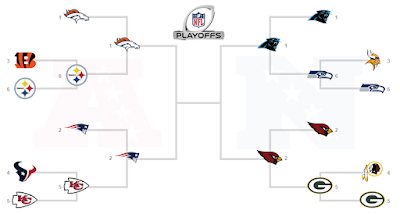 New England @ Denver -  I expect New England to win this game.  New England and most folks breathing know Peyton Manning is not the Peyton Manning of old.  I think if they can control the Bronco's running game this is New England's game to win.  That said, I'm not sleeping on Denver's defense.  They can control Brady.  He doesn't like pressure and Denver can bring it. Then it is that cat and mouse game of whether Brady can hit Edelman, Gronk, or Amendola.  I'd love to see this be a slugfest with Manning showing flashes of old.  I'm not sure that will happen but it would be awesome to watch.  Still this should be a fun close game.

Arizona @ Carolina - This game has good offense  and defense on both teams which should make for a good game.  Carolina's weakness is their ability to cover receivers.  The Cardinals' offense has to get out of their funk and take advantage of the receivers they have, specifically Larry Fitzgerald.  If Arizona can do that I think they win this game.  While Carolina can score points I'm not sure they win a shootout.  I love Cam Newton and what he can do.  He should give the Cardinals' defense fits.  There aren't great receivers on the Panthers sans tight end Greg Olsen.  Still Carolina just gets it done on offense.  I think this is also a close game with Carolina winning.

No matter what match up we get in the Super Bowl it will have great stories.  Can Brady and Belichick win their 5th Super Bowl together?  Can Peyton get his 2nd Super Bowl win while hopefully going out on the ultimate high note?  Can the Arizona Cardinals and a very deserving Larry Fitzgerald win their first championship?  Can Cam cap a MVP type season and win a Super Bowl?  It should be a fun weekend of football and I can't wait to see who we'll have in the Super Bowl.
Posted by Bulldog at 12:12 PM