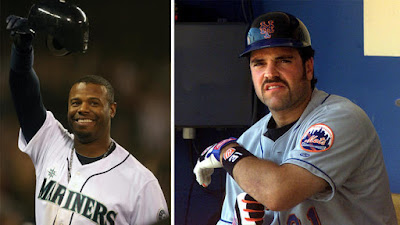 The Major League Baseball Hall of Fame voters voted Ken Griffey Jr. and Mike Piazza into the Hall of Fame yesterday.  Griffey broke the record for the greatest percentage of votes with 99.3% of the vote while Piazza goes in with 83% of the vote.  Great job by the voters (except for those 3 leaving Griffey off their submission).  Both are great players and both deserve enshrinement.  The breakdown of the vote can be seen here.

Griffey was thought to have the ability to be one of the all-time greats prior to ever playing a game.  And he didn't disappoint...  While the numbers will say it all he was one of those guys you watched and just knew.  And if injuries hadn't robbed him of so many games who knows what we'd be saying about this guy.  He only played 140+ games twice in his last 10 seasons.  Still you always knew.  The great swing, the great defense, his ability to run the bases, he did it all and he did it all great.  I'm very happy the voters recognized his greatness and made this a slam dunk.

Mike Piazza is the best offensive catcher I've ever seen.  There are others that deserve to be in the conversation but he is it for me (no offense to Pudge).  Not only did he hit for average (career .308 and 6 straight seasons of .300+ at one point) and power (427 homers) but he also got on base at a career .377 clip.  Detractors will point to his defense but you have to look at the total package and he was so dominant on the offensive side, that the fact that he was an average defender (maybe below average) can be overlooked.  (Note:  I really didn't get to see Johnny Bench until he was past his MVP years but he is definitely better than Piazza).

I also believe Jeff Bagwell, Trevor Hoffman, Roger Clemens, and Barry Bonds should be in the hall of fame.  I waffle on Tim Raines year to year and this year I'm not positive he should be in.  With the Hall of Fame trimming the fat as it be by getting rid of those voters who haven't been active in reporting on the sport for 10 years I think there is more hope than ever in getting more fair votes.  Clemens and Bonds didn't improve as much as I'd hoped but it doesn't mean they are doomed.  If nothing else, the fact it is so hard to get in definitely means that only the elite will make it.  Doesn't mean I always agree but there are only a handful of players that have been inducted of late that I would have issues with.  Good job by the voters this year with getting Jr. and Piazza in where they rightfully belong.
Posted by Bulldog at 5:02 PM