Denver and Carolina Win to Get to the Super Bowl 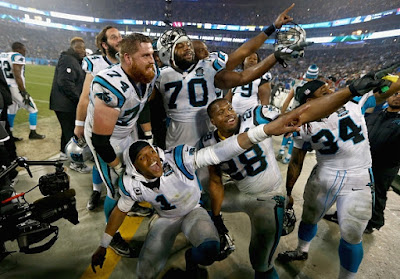 I think the only big surprise from this weekend's Championship games was the disaster that was the Arizona offense.  Granted the offense, mainly Carson Palmer, hadn't been that great of late but this was a total meltdown.  Hopefully it was just the lingering finger injury that Palmer has been dealing with and it will be resolved by next year.  The Carolina Panthers for their part still dominated both on offense and defense.  Carolina has to like the way their offense and defense are clicking going into the Super Bowl.  Whether or not Denver can move/counter move will be key.  If I'm Carolina I just keep on doing what I've been doing.  There will always be some new wrinkles the coordinators will throw into a game plan but the Panthers are good enough to win with what they have going right now.  Cam Newton is definitely on top of his game and is the MVP of the league this year.  While he has had bigger numbers before, this year he has been more accurate throwing the ball and downright scary when he runs.  It is fun to see a young team do well and if the franchise wins their first Super Bowl this year it will be well deserved. 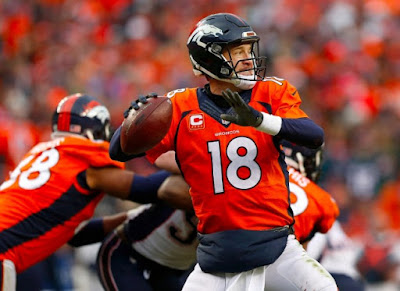 Denver made an excellent New England Patriots team look pedestrian.  While the Pats' defense played well enough to win, the offense didn't look good and if it hadn't been for the Denver fumble in their own territory in the second quarter I wonder if the game would have been as close as it was.  Peyton played well not throwing an interception and was on point while helping Denver score two early touchdowns to put pressure on New England.  To see Brady and the rest of the offense have no answers for a defense is pretty scary but that is how good this defense and coordinator Wade Phillips have been.  Great game by Denver and you have to love that Peyton Manning goes back to the Super Bowl in what may be his final game.  I hope it is his final game and, win or lose, he'll be going out on a high note.  In the Super Bowl Denver will need to find ways to run and get the ball in their receiver's hands.  They did that well this game and even had Manning rolling out much to everyone's surprise.  Against Carolina though I'm not sure three points in the second half is going to cut it.  It is nice we have two great teams and all we can hope for now is a great Super Bowl ala last year. 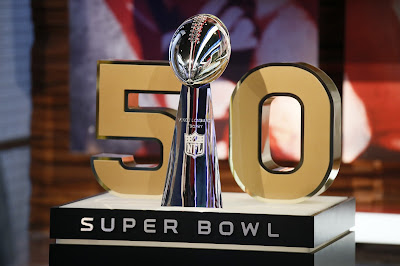