2016 Topps Archives 65th Anniversary Edition Baseball Cards:  After seeing reviews of these cards I was looking forward to their release.  I grabbed a box, with the help of Santa, which was $24.  There are a total of 16 cards per box with one autograph.  There are 65 total base cards in the set, one for each year of Topps baseball. 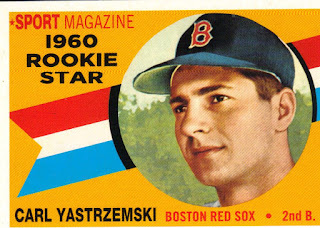 The autograph I received was the Tony Fernandez card.  Not that exciting but an autograph none the less.  The only other special card would be the green back Curt Simmons card numbered 84/150.  My favorite was Yaz but also really liked the Bench, Burroughs, and Alomar cards. 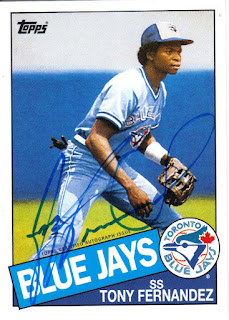 The card stock seems a bit thicker than normal but don't take that for fact.  I really like these cards.  It is nice to see the designs from each year and the retired players.  And it isn't just the design of one year which can be a downer if you didn't like that particular year's design.  I do question some of the players chosen - Ryan Klesko, Andy Benes, Mashiro Tanaka.  There are others that will make you wonder when you look at the set checklist.  Not a huge gripe but it makes you shake your head when I'd have to assume there are bigger names they could have included.  Still I like the cards and while I doubt I'll pick up another box I definitely enjoyed these cards.
Posted by Bulldog at 6:28 PM