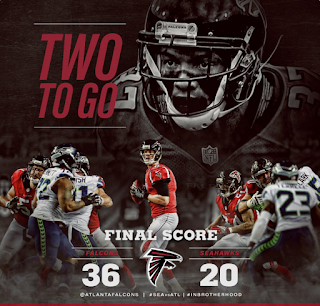 Wow what a huge win as Atlanta defeats Seattle 36-20 in the Divisional round of the NFL Playoffs.  The big news is how well their defense played.  You new the offense could score but what you didn't know is what Seattle would do when they had the ball.  After an inconsistent start to the season they had regained their running game and had a good balance coming into this game.  Luckily Atlanta was able to keep the running game in check and Russell Wilson never got in rhythm after some early success.  Matty Ice on the other hand was once again phenomenal.  He and the outstanding running game did what they have all year - score.

So who do we want next week?  That is a tough question.  Cowboys in Dallas or Green Bay in Atlanta?  To be honest I'd rather travel.  Green Bay, especially if Jordy Nelson is back, is one of the teams who can keep up with Atlanta in a shootout.  And it might be too much to ask the defense to play so well two games in a row.  Dallas on the other hand has a rookie quarterback and a shootout may not be something he is ready for in the playoffs.  No matter what, just being in the NFC Championship game is a huge deal for the Falcons and no matter the opponent I think they have a shot to win it.  I'm not saying they'd be favored but they'd have to be right there.  Great win this week and I can't wait for next weekend.
Posted by Bulldog at 7:36 PM