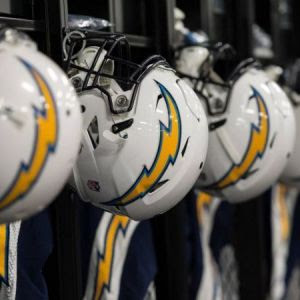 The San Diego Chargers have announced they'll be leaving San Diego for Los Angeles.  I'm very sad for the fans and the Charger's owners.  Ownership tried to keep the team there and have worked to get a new stadium deal done for over 10 years.  I also understand why it is so tough to get public money to make things happen.  We are talking hundreds of millions of dollars and for any city that is a huge bill to swallow  With all sides - fans, ownership, and the city of San Diego - wanting this to work it is a shame.  This isn't the same as when Stan Kroenke screwed over the city of St. Louis.

That said the NFL is using an old business model in getting new stadiums built.  The NFL is bigger than ever and while I'm not saying they have a billion dollars to throw away I do think they can assist enough to make these deals happen.  As is, the Chargers will pay $500M to relocate.  The NFL was up for loaning $300M for a new stadium. There is $800M right there.  Something doesn't add up.  Heck the NFL probably has enough money to loan a team all the money and let them pay it back.  I know owners aren't always keen to own and run stadiums but the NFL has to know this would be better than a team moving. 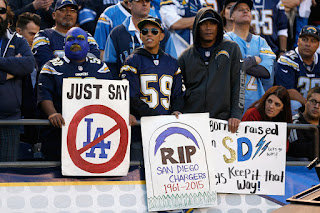 doesn't want to go there.  The San Diego fan base who has been there since beginning is without a team.  And Los Angeles is supposed to support two teams?  They haven't proven they can support one yet.  Both the Rams and Raiders have left L.A. in the past.  The Rams attendance was good last year but they are still in the honeymoon phase and the Rams have history there.  This in no way sounds like a good thing.  The Raiders seem to be on their way out of Oakland as well.  This is the NFL's fault.  While the NFL isn't going to go out of business this disloyalty to the fans can't be good long term.  This truly is sad to see and the NFL is again failing it's fans and now even it's owners.
Posted by Bulldog at 9:00 AM