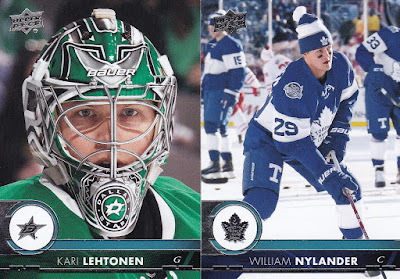 Haven't had a chance to pick any hockey until I saw packs of the 2017-2018 Upper Deck Hockey at a local Target.  The pack normally comes with eight cards but I hit with a Game Jersey insert.  Nice pull as these can be hard to get.  It isn't a money maker but still a good hit for a retail pack.  I normally enjoy Upper Deck offerings and these are nice cards.  I really like the photo of William Nylander from the Winter Classic game.  Big game in the sport and great to see it captured.  The team logos on the front are foil which is not something I'm big on but they aren't bad here.  The fronts leave plenty of room for the great photos which is always a big plus.  The backs are nice and colorful with a bit of dead space but still good looking backs.  Another solid nice looking effort from Upper Deck.  As I just don't have much room for adding more sports and cards to my collecting efforts, I probably won't grab another pack of these but I look forward to Upper Deck hockey every year nonetheless. 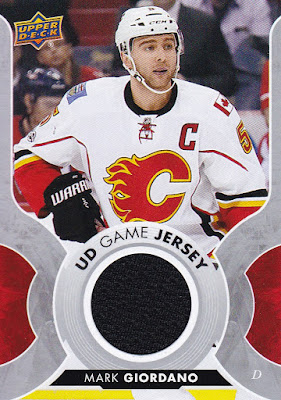