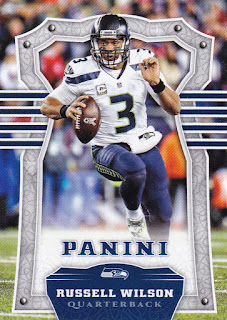 I've had these 2017 Panini Football cards for a while but wanted to share.  These are nice looking cards.  The in card frame of the player photos is a bit different me but I'm willing to work with it.  The photos are nice but wouldn't have minded seeing more of it.  The backs are pretty simplistic but nice and colorful.  Would have liked at least one stat line but I am ok with these overall.  The inserts were nice as well.  So while I like the cards I won't say I was overly excited about but have no complaints.  Confusing enough?  Maybe I'm still trying to figure out how much I like them.  Either way I'll settle on I like them and will probably grab more packs and we'll see what I think then.