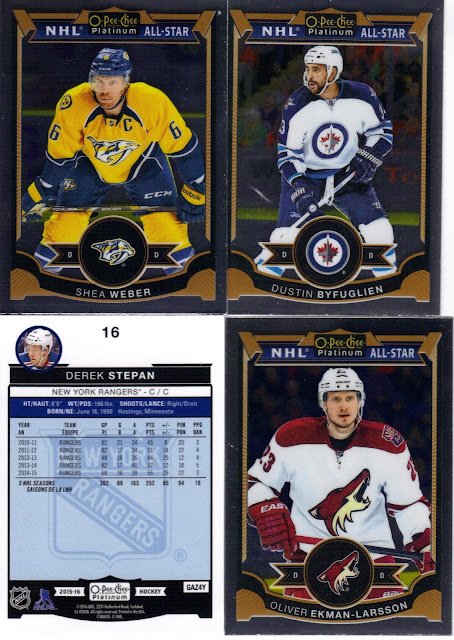 I've done a few posts on hockey cards and have actually been pretty excited about them due to the great cards Upper Deck puts out.  That emboldened me to pick up a pack of the 2015-16 O-Pee-Chee Platinum Hockey Cards.  I should have put a little more thought into it.  I'm a fringe hockey guy but a big fan of the Upper Deck hockey cards.

That said, I am not a fan of chrome cards nor am I a fan of expensive cards.  A little research, actually any, would have told me these weren't for me.  There were only four cards in the pack which ran me $4.99.  Ouch.  That was my fault as I didn't pay any attention to the pack or the box I grabbed it  from.  Fail.  And they are chrome and I just don't get chrome cards, or chromium which is another term I've seen them described as.

That is not to say these aren't good cards.  I just don't appreciate them.  So I'll leave it up to you to decide whether or not these are worth picking up.  Hopefully the pictures do them justice.  I might still pick up a pack of the regular O-Pee-Chee Hockey but I'll cross that bridge when I get to it.