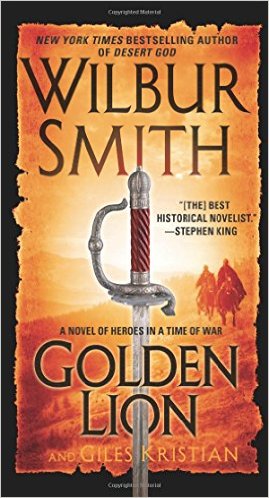 The book Golden Lion by Wilbur Smith and Giles Kristian is not one I'd normally pick up but found myself without a book during a recent trip.  I enjoyed it.  The book is set in the 1600's set against the British fighting in Africa, ships, pirates and much more.  If any of these things are up your alley give this book a try.  I enjoyed it enough that I'll look for more books by Wilbur Smith and Giles Kristian.


Amazon description:
He saw his father executed in battle. He spent his youth avenging that death. And now Henry 'Hal' Courtney is a man with a ship – and a family – of his own.  But fate has not finished with Hal. On a voyage along the eastern shore of Africa, a powerful enemy abducts his wife, the fearless warrior Judith… and with her, Hal's unborn child. For Hal, a man all too familiar with loss, there is only one way forward: He must track his nemesis across desert and ocean, through the slave markets of Zanzibar and the dangerous waters of the coast, in pursuit of the woman he loves, the child he sired, and the glorious destiny that awaits him.
Posted by Bulldog at 6:00 AM