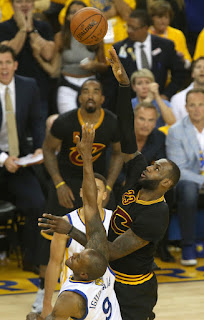 The Cleveland Cavaliers and LeBron James have brought the city a championship for the first time in 50+ years.  And it was well deserved.  After going down 3-1 they became the only team ever to come back from that deficit and they won the 2016 NBA Finals.  LeBron garnered the series MVP as he led all players in points, rebounds, assists, blocks and steals per game.  And for all his shooting woes he ended up shooting 37% from beyond the arc in the series.  Wow.  Truly historic series for him and Cleveland. Kyrie Irving was a huge part of Clevleand's championship scoring 27 points per game on 47% shooting to include shooting 40% from beyond the arc.  He also added over two steals a game.  Only two other Cavs scored in double digits both averaging 10 points a game (J.R. Smith and Tristan Thompson).  Thompson also had a great series averaging a double double.  But James and Irving were the stars who carried Cleveland to this win.  They were excellent considering everyone knew they were Cleveland's offense with the rest of the team struggling to hit shots.  This was still a team game and their Cav's defense can't be overlooked.  It would be one thing to play Golden State tough for one or even two games but to see them do it in multiple games during the series was pretty surprising.

Klay Thompson (43% on 2's/35% on 3's) and Stephen Curry (40% on both 2's and 3's) struggled to find their shooting stroke under the pressure.   While Curry's 40% from the arc is great for almost any other player it just didn't cut it for the league MVP against a good Cleveland team.  He looked lost out there at times and was posterized by James a couple of times in the series.  He also had a key turnover in the last few moments of game 7.  Despite being suspended for one game Draymond Green was the star of this team leading them in points, rebounds, assists and steals per game.  You couldn't ask for much more from him.  The loss of Andrew Bogut was bigger than many might think in my opinion.  For his limited minutes he still averaged 2 blocks per game (one every 6 minutes) and at least gave them a hint of rim protection.  I thought James and Cleveland were able to use that to their advantage once he was out.  Tough way to end a season in which Golden State could have rightfully put themselves in the "greatest team ever" discussion with their second championship after their record run in the regular season.  Just wasn't to be. 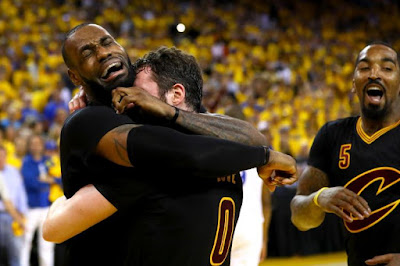 I definitely found myself rooting for Cleveland.  No fan base should have to wait so long to celebrate a championship.  LeBron also deserved it.  He left Cleveland in what was a business decision and it worked out for him as he scored two rings.  Then he came home and lived up to the hype with back to back Finals trips and now another ring, his third in six trips to the championship series.  There are many great stories with this team and I'm happy for all the players.  While you would like to think this team will be to more Finals you just don't know.  Fate can be fickle.  Ask Golden State.  Congratulations to the Cleveland Cavaliers!
Posted by Bulldog at 8:19 PM