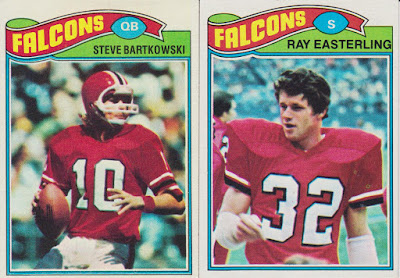 Picked up some Atlanta Falcons teams sets from eBay.  The 1977 team set showcases a bad 4-10 Falcons team.  Steve Bartkowski wasn't yet the star he would be come.  Still this set has many Atlanta Falcons greats to include Bartkowski, Claude Humphrey, and Jeff Van Note,  Other very good players here are John James (for having to punt so much and doing it well), CB Roland Lawrence, and TE Jim Mitchell (Falcons all-time pass receiver at the time of this set).  This was still before Topps had the rights to display team logos nor were action shots the norm.  Overall I like this set.  The Falcon greats alone makeup for anything I could try to say negative about the design.  NOTE:  It is odd that none of the top three leading rushers nor leading receiver and, my personal favorite, Alfred Jenkins weren't included.   Not sure what went into picking the players. 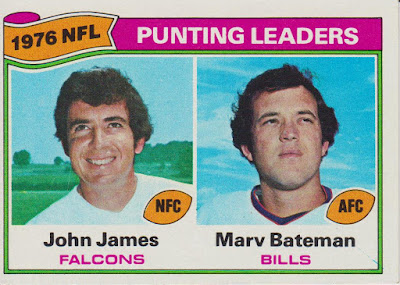